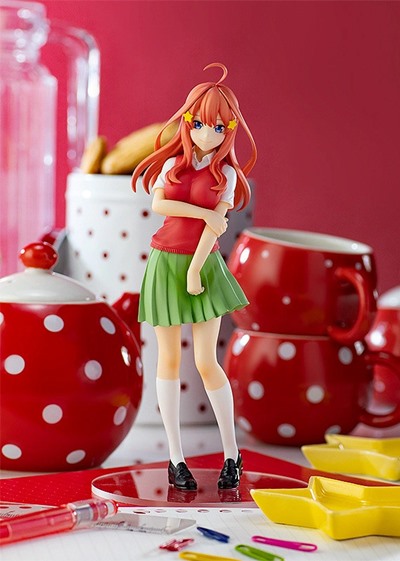 There are few anime series I don’t like. Sadly, the very popular The Quintessential Quintuplets was one of them.

I have no idea why.  I just couldn’t get into it and didn’t particularly like the characters.

But…a new collectable figure has just been released that even me, as a not-a-Quintessential Quintuplets-fan, I would still buy as it is absolutely GORGEOUS!!

That figure is the POP UP PARADE Itsuki Nakano figure — a beautifully crafted and colored figure of the fifth Nakano sister — and the adorable pose, the sweet smile and the beautiful craftmanship make this one a true standout.

POP UP PARADE is a new range of affordable collectable figures, that are also released fast.

Each figure stands 17-18cm in height and, with a huge number of anime and game characters to choose from, there is likely to be something for everyone.

The POP UP PARADE Itsuki Nakano figure is manufactured by Good Smile Company, and was sculpted by Keita Tagami.

The figure is painted ABS&PVC non-scale, and comes with a stand. As the figures are partially hand-painted, each one is slightly different.

The Itsuki Nakano figure is approximately 170mm in height.

The figures are also made-to-order, so there is no chance of them selling out before you reserve one.

And, if you haven’t seen the series yet, or are in the mood for a re-watch, you can watch The Quintessential Quintuplets Season 1 and 2 on Crunchyroll.