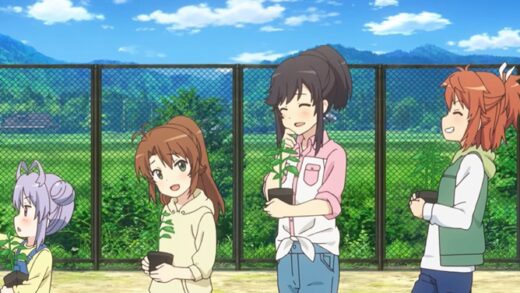 The Non Non Biyori Nonstop Complete Collection Blu-ray will be available at Sentai Filmworks starting on July 12th, and features all 12 episodes of the slice-of-life, comedy anime series, plus the OAD “Our Club Worked Hard“.


The series and OAD will run for a total of 325 minutes on 2 discs.

Along with that, the Non Non Biyori Nonstop Complete Collection Blu-ray will also feature:

Sentai Filmworks says this about the plot:

Asahigaoka is just about as small as a town can be, and living in a small village means approaching life a little differently. After moving from the biggest of big cities, Tokyo, Hotaru has fully adjusted to that lifestyle, and she’s learned to find and appreciate pleasures that she would never have noticed before.

Like the beauty of nature even in the smallest things. Or the reliability of knowing everyone who works at the same stores that have been there forever. The new faces in town… WAIT! WHAT? NEW FACES???

Yes, shockingly, it’s true! But in the end, one thing remains most important: the fact that everything is still better when you experience it with friends you love and trust. Join Hotaru, Komari, Natsumi, Renge, and Suguru once more as they live life to the fullest.

Watch the trailer for the series below, then head off to Sentai Filmworks to pre-order the Blu-ray collection.

RELATED: How to watch Non Non Biyori in the right order — it’s easy