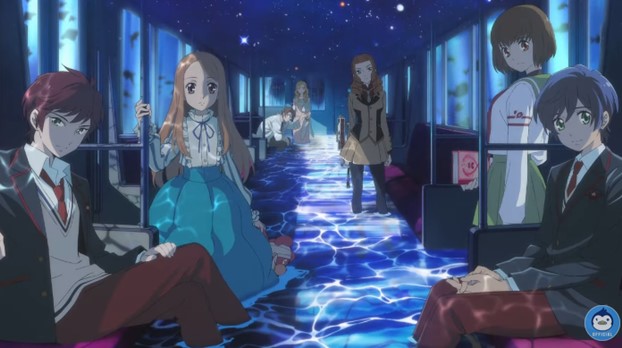 The crowdfunded compilation films Re: Cycle of the Penguindrum got their first teaser trailer today, along with the film’s first key visual and the release date for the first of the two planned films.

A day of firsts, indeed.

An official website for the upcoming films was also launched this week.

The new Re: Cycle of the Penguindrum key visual shows the main characters on the now familiar train we were used to seeing in the original 2011 anime series.

A fitting illustration, considering the first of the two-part Re: Cycle of the Penguindrum films is titled ‘Your Train is a Survival Strategy‘.

Re: Cycle of the Penguindrum is being directed by Kunihiko Ikuhara (Mawaru Penguindrum), with Noboyuki Takeuchi (Sarazanmei) as deputy director. Lily Hoshino is back as character designer, with animation production by Lapin Track.

The main cast from the anime series is also returning to reprise their parts in the additional scenes.

Personally, I don’t see the point of Re: Cycle of the Penguindrum, as it is just a compilation of edited scenes from the anime series I have already seen, plus a few additional scenes.

For almost a million dollars, which is what the crowdfunding for Re: Cycle of the Penguindrum raised, I would have hoped for a new story entirely.

Than again, maybe that’s just me?

Watch the Re: Cycle of the Penguindrum teaser trailer. Who knows, you may think differently.