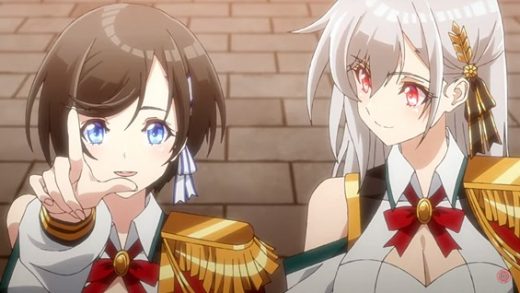 Particularly the girls’ military-style costumes with their gold epaulettes and medal-style hair accessories, as well as Inglis’ rich looking cape that flows around her as she fights.


After all, if you look at the new key visual and the teaser trailer, the way the character designs for Inglis and Rafinha have been created are beautifully stylish but still nicely militaristic.

They are also very close to the designs in the Reborn to Master the Blade: From Hero-King to Extraordinary Squire manga written by Hayaken and illustrated by Moto Kuromura,

For me, someone who will often like a manga or anime just for the character designs alone then, it makes the upcoming Reborn to Master the Blade much more appealing.

Especially as the manga the anime is based on isn’t much more than a generic fantasy with characters that are a little bland and dull.

Let’s hope then that, while the Reborn to Master the Blade character designs are loyal to the manga, the anime doesn’t stick to it in that respect, eh?

Cast and Staff for Reborn to Master the Blade

Along with the trailer and key visual released today, the voice actors for Inglis and Rafinha were also announced.

Akari Kito (who plays Nezuko in Demon Slayer: Kimetsu no Yaiba) as Inglis

The Reborn to Master the Blade anime is being directed by Naoyuki Kuzuya (Saiyuuki Gaiden), with Mitsutaka Hirota (Rent-a-Girlfriend) in charge of script composition.

J-Novel Club publishes the original light novel series the Reborn to Master the Blade anime series and manga are based on.

Check out the rough first Reborn to Master the Blade teaser trailer, which features both Inglis and Rafinha, and note how the character designs have been nicely created to be elegant, but still quite militaristic in style.