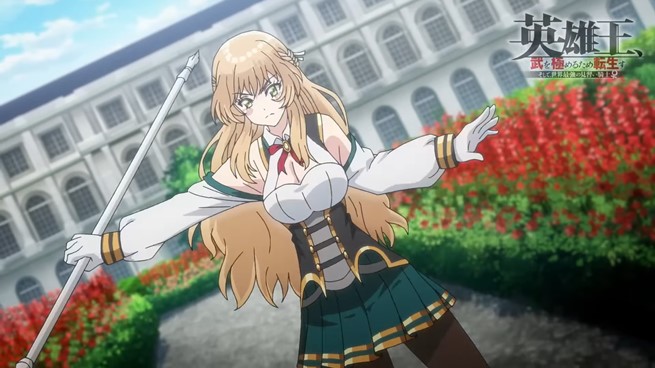 The Reborn to Master the Blade: From Hero-King to Extraordinary Squire creditless opening animation was released this week right after the premiere episode of the fantasy anime was released.


The opening animation also showcases the opening theme song ‘DAY1‘ by AUO feat. Win Morisaki that, as anime OP’s go, is definitely one of this season’s bangers.

While the full-length version of the song has not officially been released yet, you can still listen to AUO’s OP TV Edit via the Spotify player below.

The Reborn to Master the Blade: From Hero-King to Extraordinary Squire anime is based on the light novel series by Hayaken and Nagu (called 英雄王、武を極めるため転生す ～そして、世界最強の見習い騎士♀～ in Japanese).

The anime is directed by Naoyuki Kuzuya (Bikini Warriors), with series composition by Mitsutaka Hirota (Edens Zero), and character design from Maki Fukui (key animation for Sing a Bit of Harmony).

Studio Comet is in charge of anime production.

There are currently eight volumes out in Japanese, with seven out in English and the eighth English language volume out on March 10th via J-Novel Club.

From his deathbed, Hero-King Inglis, the divine knight and master of all he surveys, gazes down on the empire he built with his mighty hand. Having devoted his life to statecraft and his subjects’ well-being, his one unfulfilled wish is to live again, for himself this time: a warrior’s life he’d devoted himself to before his rise to power.

His patron goddess, Alistia, hears his plea and smiles upon him, flinging his soul into the far future. Goddesses work in mysterious ways—not only is Inglis now the daughter of a minor noble family, but at her first coming-of-age ceremony at 6, she’s found ineligible to begin her knighthood!

However, for a lady of Inglis’s ambition, this is less a setback and more the challenge she was (re)born to overcome. “It’s not the blood that runs through your veins that makes a knight; it’s the blood you shed on the battlefield!” The curtain rises on the legend of an extraordinary lady squire reborn to master the blade!

Watch the just released Reborn to Master the Blade: From Hero-King to Extraordinary Squire creditless opening animation below.

Having watched the first episode, if you are looking for a decent action fantasy anime during the Winter 2023 season, this one shows promise.