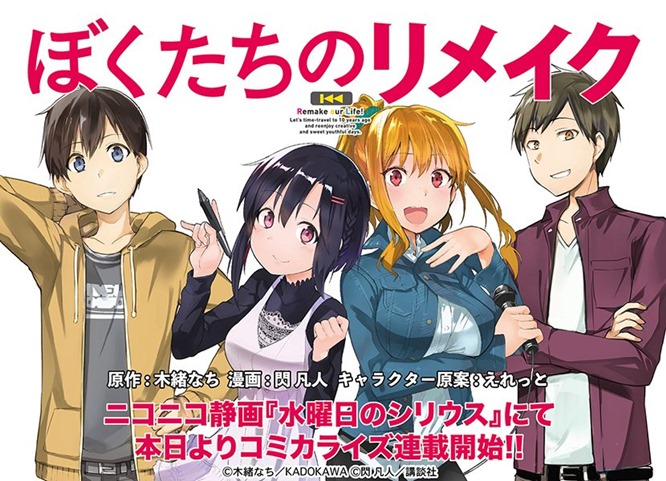 As an avid gamer, manga fanatic, light novel fan and anime lover, the news there will be a Remake Our Life! anime series in 2021 was one of the best pieces of news I have heard all week.

The official Twitter account for the light novel series by Nachi Kio and Eretto announced the Remake Our Life! anime today, simply saying the anime will be broadcast some time in 2021.

At the same time, they mentioned the latest volume in the series is also out today — November 25th.

Remake Our Life!, aka Boku-tachi no Remake, tells the story of Kyoya Hashiba, an unsuccessful video game director whose company goes bankrupt.

Kyoya is out of money himself, so soon ends up living back at his parents’ house where he lies in his bedroom feeling sorry for himself, and thinking about all the creators of his generation who were successful.

When he wakes up, he discovers he has gone back in time by a decade right as he is starting college. He now has the chance to relive his life, avoiding the mistakes he made the first time through.

Kyoya’s new life begins with him living in a co-ed share house. But will he be able to remake his life, or will it all go wrong again? (article continues after the promo…)

The first novel in the now 8-volume series was released in March, 2017, and is one of the most popular light novel series in Japan.

The story has also been released in a manga adaptation beginning in late 2018, with the fourth volume shipping this Wednesday.

Prior to the news of a Remake Our Life! anime series today, the Boku-tachi no Remake Twitter account had tweeted a teaser video about an anime project based on the light novel series late last year.

Check that out below.