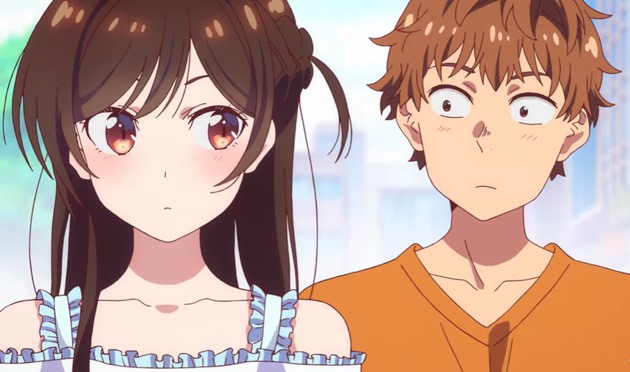 As you would expect, the Rent-a-Girlfriend opening animation concentrates on the protagonist — 20-year-old college student Kazuya Kinoshita — and the ‘girlfriend’ he rents — his next-door neighbor Chizuru Mizuhara.

But it also shows off Kazuya’s ex-girlfriend Mami Nanami — the one who dumped him — and supporting characters like ‘rental girlfriends’ Ruka Sarashina and Sumi Sakurasawa, and Kazuya’s friends Shun ‘Kuri’ Kuribayashi and Kazuya’s loyal childhood friend Yoshiaki Kibe.

All voiced, by the way, by an excellent cast.

The opening animation also does a great job showing off the premise of the new anime series — Kazuya gets dumped by his girlfriend and decides to rent one for 5,000 yen per hour so that he doesn’t feel like the loser he thinks he is.

Chizuru, the girl he rents, however, turns out to be quite a bit different than he expects. And a heckuva lot more of a handful.

Watch the cute Rent-a-Girlfriend opening animation below, and listen to ‘Centimeter’, the upbeat opening theme song from the all-female band the peggies.

The first two episodes of Rent-a-Girlfriend are now available on Crunchyroll. The first one for everyone, and the second episode only for premium viewers for the next week.