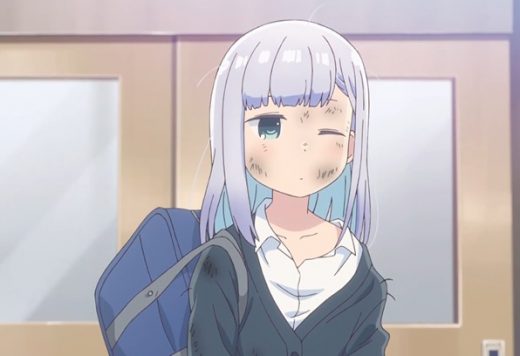 Review: Aharen-san wa Hakarenai Episode 2, “Are We Being Followed?” and Aharen and Raido are becoming firm friends

If you watched the first episode of the anime series Aharen-san wa Hakarenai, you probably already know Aharen will be a bit of a problem.

After all, the poor girl doesn’t understand what is an appropriate distance for personal space, can’t seem to speak above a whisper and falls asleep in class with her eyes wide open.


No wonder her seat neighbor Raido Matsuboshi is a little bit bemused every time she is around.

So, when Aharen-san wa Hakarenai, Episode 2 began, you might have been as unsurprised as me to see Aharen arrive in class looking like she had just been dragged through a hedge.

Backwards, forwards and then backwards again.

But, of course, Aheran-san wa Hakarenai being as ridiculous as it is, it turns out she didn’t get into a fight with a gang on her way to school as Raido guessed.

Nope. Instead, Aharen got something in her eye and walked to school slamming into walls and poles, as she couldn’t see where she was going.

We then spend an hilarious few minutes watching Raido trying to put eye drops in her irritated eye, while Aharen dodges his every attempt.

And this is what is so perfect about this funny anime series, the superb comedic timing that makes almost the entire episode laugh out funny with its craziness.

Episode 2 of Aharan-san is also where we meet the possibly scary Oshiro-san. Aharen’s childhood friend, and someone who mistakenly believes Raido is ‘menacing’ Aharen. 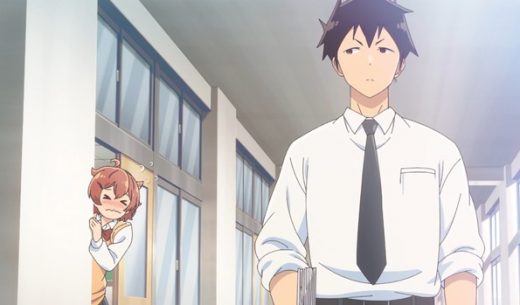 Turns out, though, Oshiro-san isn’t scary at all. She’s just incredibly timid.

And that’s why her way of ‘protecting’ Aharen is to watch Raido. From a distance.

Even though Aharen notices her the second she shows up, while Raido believes he is being followed by an assassin.

So, yes, Aharen does actually have friends. It’s just that right now she is peculiarly attached to Raido rather than to anybody else.

Probably because, while other people ignore her or feel the urge to protect her, Raido is just laidback about the whole scenario, letting Aharen do exactly what she likes whenever she feels like doing it and fitting in with her plans where he can.

The funniest part of the episode, however, is the 377 hours during which Aharen tries to tell Raido his fly is open. Or, do everything she can to cover it up, so other people don’t notice what she saw the minute he walked in the classroom — the cutest pair of strawberry underwear peeking out of Raido’s open zipper. 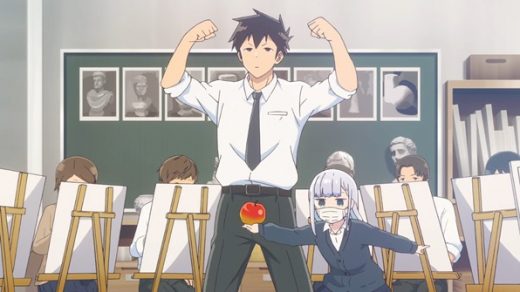 And I always wonder when I watch comedy anime as funny as this one, what goes on in the mangaka’s head that they can come up with scene after scene that is so surprisingly funny yet beautifully written, and with characters that are as quirky as they are sweet?

After all, when we first meet her, Aharen-san looks like she might be the dopiest girl in the school. Until we learn, when it’s important, she is actually quite bright.

Especially when it comes to taking care of someone she likes.

Raido too is a lovely lovely guy.

Not put off by anything Aharen does, but just interested in how she behaves, happy to hang out with her even if she is a little strange, and willing to do whatever he can to fit into Aharen’s bizarre way of getting through life.

No wonder these two hit it off so well right from their first meeting, as it may just be the first time they have met someone they almost immediately clicked with.

That is why, as we see further episodes of Aharen-san wa Hakarenai, while the show is incredibly funny, I am also expecting to see quite a bit of character development.

As, let’s face it, in the first two episodes, the type of people we expected Aharen and Raido to be didn’t turn out to be that way at all.

Now I can’t wait to see how they end up.

Oh and, by the way, it turns out Aharen-san is a bit of a Reversi prodigy as well.

RELATED: Aharen-san wa Hakarenai, Episode 1 is even funnier than I expected and, man, aren’t Aharen and Raido so darned sweet??