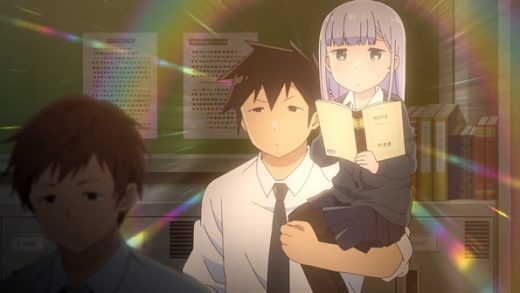 Aharen-san wa Hakarenai Episode 4 was released over the weekend and, while not my favorite episode, it was still a very entertaining 20 minutes.

Even if the plot was too all over the place, the pacing was slower than previous episodes, and with fewer deep belly laughs than the first three shows.


Then again, sometimes it’s nice to have an episode that is more about showing how crazy these two characters are than moving the story forward.

She interprets this as ‘flirting’ then realizes Raido is kindly letting Aharen share his textbook. Overcome with romantic thoughts, she glances across again to see Aharen now sitting on Raido’s lap.

But, when seconds later, Raido has picked up Aharen so she can see the board, this is all too much for Tobaru-sensei, who has a nose bleed then collapses.

After class, Aharen is choking on food, but Raido doesn’t realize it.

It is then he decides she needs to practice to become ‘more expressive’, as her deadpan face doesn’t show her emotions, and that could be dangerous. So he takes her to a variety of places to make her sad, happy, or afraid.

Not that Aharen’s deadpan face changes in anyway, you understand. Even when she is crying.

Once he’s finished, Raido decides he will now be able to tell what Aharen-san is thinking and feeling. But, when he compares old photos of Aharen-san with new ones, her facial expressions haven’t changed.

What’s hilarious here though is, while Raido is worried about Aharen’s deadpan face, he doesn’t seem to realize his face is no more expressive than hers. If anything, it’s just as wooden.

Plus, did you notice the quick look at the photos on Raido’s phone, with most of them being of Aharen?

Sure, this might be a platonic relationship at the moment, but this is just one of the signs it may not stay that way.

But, it’s at the CD shop where things begin to change, as Aharen discovers rap music.

Next morning, she brings a microphone to school and begins to rap when she meets Raido. And, isn’t that sweet husky voice just the cutest thing?

This gives Raido the idea that rapping could be the best way to communicate with Aharen, so he practices until he is perfect at it.

Soon, he and Aharen are in a ‘rap battle’, with no clear winner in sight. But, at least Aharen is now understandable.

And that would have solved Aharen and Raido’s communication problems. If their microphones hadn’t been confiscated by a teacher, that is.

But Raido’s sister gives him a fidget spinner and, as soon as Aharen-san sees it, she takes it and teaches herself to do some amazing tricks.

Of course, nothing is ever simple in Aharen World though, and soon she is so addicted to the spinner she’s not sleeping.

Aharen, however, is more complicated than she looks so, while Raido is thinking of a way to stop her addiction, she calmly hands the fidget spinner back to him as it isn’t fun anymore.

At the park, Aharen-san is approached by children calling her King Aha, and Raido learns she has made friends with them, as they loved watching her fidget spin tricks. 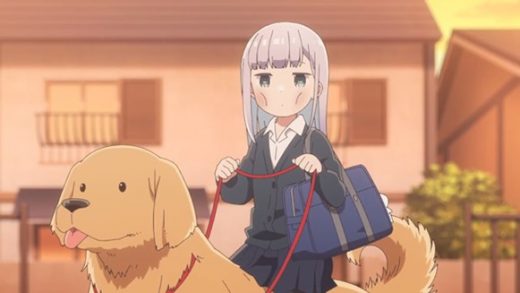 The rest of the episode is the girl in the group being angry with Aharen because the boy she likes is paying too much attention to her, so she challenges Aharen-san to a game of Reversi.

The one who loses must forfeit their right to talk to the boy.

Knowing how important it is to the girl, Aharen lets her win.

By the end of the day, Aharen is so emotionally wiped out from dealing with school and the kids, she heads home riding on her gigantic dog Nui.

While Aharen-san wa Hakarenai Episode 4 was fun, the caliber of writing was not as funny or as smart as the first three episodes.

Leading me to worry that, only four episodes in, and the hilarity of the anime’s first episodes has already diminished considerably.

But, Aharen-san wa Hakarenai Episode 4 did beautifully show off Raido’s craziness, to the point that he is imagining Aharen being possessed by a devil as she does a weird dance then asks for water, only for her to explain she was choking.

And as he panicked about the “wild creatures” showing up in the park to attack Aharen when, in reality, the dog and cat that appear couldn’t be smaller or cuter.

RELATED: Which Japanese voice actress voices Aharen-san? One of the country’s most popular

Yep, Raido’s overactive imagination is as loony as Aharen’s lack of spacial awareness. To the extent that it is quickly apparent why these two get along.

What’s also fun about this is, in Aharen-san wa Hakarenai Episode 1, we are led to believe Raido is the calm, cool, ‘normal’ one, while Aharen is the one who is more than slightly strange.

By Episode 4, however, it is apparent Aharen isn’t the only unhinged one here. If anything, Raido might be worse. Something he has been able to largely cover up with his concern over Aharen quite well until now.

That was why Episode 4 of Aharen-san wa Hakarenai was more of a character development episode than one full of gags (although those rap battle scenes were hilarious), as we learn more about Raido’s own weird tics, and Aharen’s ability to master just about anything she tries.

Watch Aharen-san wa Hakarenai Episode 4 (and the first three episodes too) on Crunchyroll as, while not as cleverly written as the first three, it still shows off the ‘out there’ comedy that has made this show such a big hit.