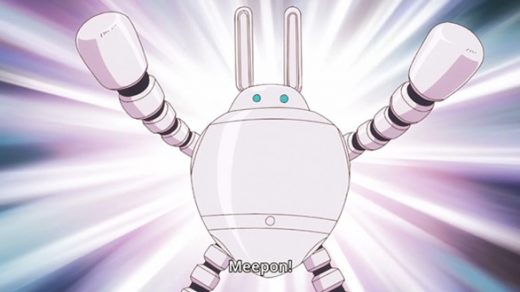 The decline of Fantasy Bishoujo Juniku Ojisan to occurred in Episode 10 when the once hilarious isekai anime series took a huge dive into the realm of the unfunny.

Thankfully, as Fantasy Bishoujo Juniku Ojisan to Episode 11 premiered today, it seems that dullness was only a momentary problem as, with the latest episode, the anime is back to being one of the funniest of the Winter 2022 season.


Here then is this week’s review of Fantasy Bishoujo Juniku Ojisan to Episode 11, “A Guy Who Reincarnated as a Fantasy Knockout and a Weapon for the Final Battle“.

Review: Life with an Ordinary Guy who Reincarnated into a Total Fantasy Knockout, Episode 11

When it comes to slapstick humor, Episode 11 has more than its fair share.

Whether it’s Jinguuji and Schwartz trying to come up with a plan to annihilate Meepon, the massive robot rabbit/weapon Tachibana is trapped in, or the robot attacks x 2 perpetrated by Demon General Vizzd after getting into a shouting match with Ugraine’s head maid, the silliness in this thing is brilliant.

Episode 11 starts off with Tachibana and Ugraine kidnapped by the head maid, and being hypnotized into opening a vault underneath the city so they can take over the kingdom’s ultimate weapon.

But, of course, it doesn’t end there as Ugraine is then knocked unconscious and Tachibana, the Hero, is thrown into the enormous metal rabbit to then be sent out to wreak havoc on the city.

Some of the funniest scenes are as Jinguuji, Schwartz, Lucius and Shen try to come up with a plan to either head off or destroy the bunny, but with Jinguuji informing Schwartz he can’t do much to help.

“When Tachibana and I get separated, I lose my superhuman strength”.

And so it’s now up to Schwartz to slice that massive incoming death ray before it pulverizes the city and everybody in it.

And wasn’t this episode the best Schwarzt yet?

Because, honestly, he has gone from nothing but an annoyance for me to one of the funniest characters in the show.

Especially as he was all excited to finally have been isekaied into a fantasy world as a Hero, only to discover episode after episode that literally nobody has his back.

One of the funniest scenes to me though was one of the most deadpan, when Schwartz is readying himself to attack the death ray that’s about to slice him in half, and Jinguuji and Shen calmly comment “Ganbare” (aka “Good luck”).

I laughed so hard, I replayed that scene four times.

Of course, it’s just Jinguuji and Shen trying to push Schwartz into full-on ‘Hero Mode’ because they can’t do much — (“Everyone here will die if you can’t defeat that thing”) — and that’s why he ends up doing it.

Meanwhile Vizzd, who is controlling the robot is proving herself to be nothing but an annoying spoiled brat, who couldn’t follow a battle plan if it jumped up and bit her in the tail.

Then again, if you’re working for a Demon Lord, you are probably not too bright in the brains department anyway.

That is why, as Vizzd also has no concept of self-control, she quickly screws up the robot allowing Tachibana to take control.

But, just when you think we are back to Tachibana and Jinguuj happily reunited, and off to destroy the Demon Lord’s helpers, the story gets flipped on its ass again.

Thus illustrating the immense talent of manga author Yuu Tsurusaki and screenwriter Toshimitsu Takeuchi in writing something this surprising, and this funny.

That story flip has Tachibana pissed off at Jinguuji because she feels he looks down on her, as he is good at everything and she/he is good at nothing.

And now we have a Tachibana so angry she decides to use the power of the robot to kill him.

Thankfully, that typical Japanese apartment door saved him. The first time at least. But the incoming second attack the show ends on doesn’t look quite as hopeful, eh?

And what is fabulous about Fantasy Bishoujo Juniku Ojisan to Episode 11, other than that it made me belly laugh then rewind several times so I could belly laugh some more, is that it sets up the upcoming final episode of the first season with the potential for greatness.

Not only in the way events move forward at such a head-spinningly surprising rate, but in how the episode uses the characters both on the screen (especially Schwartz and Jinguuji) and those off the screen (poor Muria still hog-tied and hanging from the ceiling somewhere) to give us  some of the most ridiculously funny scenes in anime.

Episode 12, the final episode of Fantasy Bishoujo Juniku Ojisan to Season 1, will be out this same time next week and, man, I’ll be sad when this thing ends, as all those laughs set me up for a happy night.