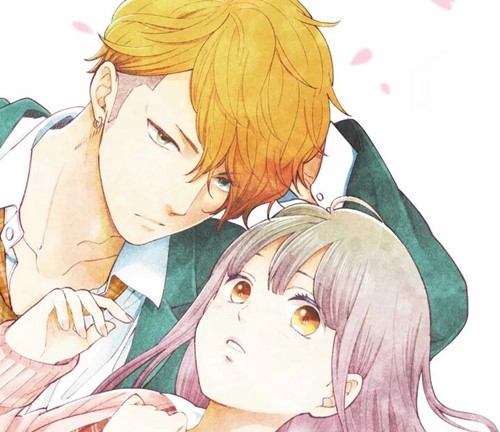 For my second high school rom-com manga of the week (and no, I really don’t normally read this genre. Honest!), I picked up Ima Koi: Now I’m in Love Volume 1.

And, all I can say is what with loving Sakura’s Dedication, and then laughing so hard I thought I would pee at Ima Koi: Now I’m in Love Volume 1 by Ayuko Hatta, this has been a bumper week finding manga I love.


But especially Ima Koi, as the first volume of this new manga is one of the funniest manga I have read in eons, and the absolute sweetest.

This recently released first volume of a brand new rom-com manga tells the story of high school students Mizusawa Satomi and Yagyuu Kazuma, and a relationship that begins after Yagyuu saves Satomi from a pervert on the train.

Not wanting to be thanked, after the train doors open, Yagyuu rushes off down the platform, but Satomi realizes he is a boy from her school. A very tall boy, who is obviously a senior.

Except, when Satomi gets to school, finds the boy and thanks him, it turns out Yagyuu is a first-year like herself. He’s just really really tall.

Soon Satomi is inviting Yagyuu out for a meal as a thank you, he tells her it’s not necessary and leaves, and she responds by jumping over a stair rail right down onto the platform next to him so she can ask him again.

Scaring him, and terrifying herself, as she could have been seriously hurt.

Then as she shouts “I asked you not just for a thank you, but I wanted to be your friend”, he agrees to go for a meal with her.

But only a few hours later, Yagyuu seems to think she has confessed to him and, before Satomi knows it, the two are going out.

What happens from there is the sweetest, funniest, nicest, most wholesome high school romance between a girl who is always blurting out what she thinks, and a boy who suddenly finds himself head over heels in love with a girl he hadn’t even noticed before.

Why is Ima Koi: Now I’m in Love such a wonderful manga?

A good manga for me has to feature characters I like and, with Ima Koi, it is not just Yagyuu and Satomi I quickly fell in love with, but every character in it is wonderfully likeable as well.

What makes this such an enjoyable manga, though, is the chemistry between the two main characters, and the way the relationship between the two quietly builds over time.

All written in a way that seems as if it could happen in real life, and with none of the unbelievable circumstances you often find in other similar manga.

Satomi is an interesting mix of quite shy and unsure of herself, but forceful and happy to share her honest opinion when it suits her. Something that initially shocks Yagyuu, but then something he grows to love.

Especially because many of the things Satomi says are things she notices and admires about Yagyuu, and isn’t shy in telling him.

Considering she is teeny tiny, but also not afraid to aggressively stand up to rude people when it is Yagyuu who is the target, soon he finds himself besotted with just how cared for she makes him feel.

For Yagyuu’s part, while he initially seems to be someone who might have just started dating Satomi out of convenience, it isn’t that way at all.

Instead, he finds himself being quietly drawn towards the sweet, funny and sometimes strange Satomi more than he ever expected, and so is soon treating her as the most precious thing to him.

Even as she does the funniest things, simply because she is nervous around him.

Yagyuu too is not afraid to say what he thinks when it comes to Satomi.

So you know, if these two ever get into a fight, a misunderstanding wouldn’t stick for long as both of them are too outspoken to let it.

If you are looking for a sweet, wholesome rom-com manga featuring laugh-out-loud then must-rush-off-to-the-bathroom scenes between the absolutely cutest couple, Ima Koi: Now I’m in Love Volume 1 is a manga I definitely recommend.

Pick Volume 1 up in paperback and in a digital file via VIZ Media now.

Now I’m desperate for Volume 2 (and an anime adaptation, because Ima Koi would be perfect as one).

Official Japanese site for the manga.