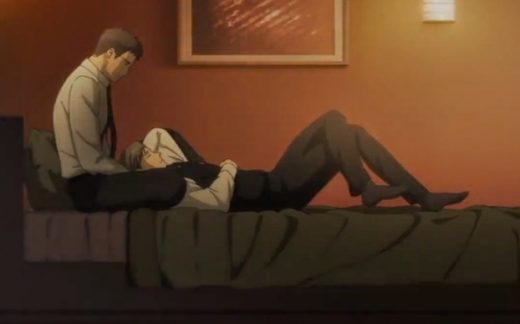 Late to the anime party as always (Come ON, there are a million anime out there — who could possibly watch them all), yesterday I stumbled across this absolute gem — the Boys’ Love anime film Saezuru Tori wa Habatakanai: The Clouds Gather.

And a punch to the gut, not only in the heart-breaking telling of the story of Yashiro the Yakuza boss who isn’t quite as hard or as emotionally untouchable as he pretends, but also in that gorgeous Saezuru Tori wa Habatakanai: The Clouds Gather ending theme song — ‘モラトリアム’ by Omoinotake. (Song title in English ‘Moratorium‘).

A song that hits even harder as it immediately follows the film’s last scene in which Yashiro, shot twice, is remembering his high school days when he was in love with Kageyama, and how much that forbidden and always lost-to-him love hurt.

His last thought as he looks back on his sad life, “I’ve known more than enough…”.

The boy who never had a chance right from the start.

And if that didn’t just break you heart, I don’t know what would.

Listen to Omoinotake’s ‘Moratorium‘ below, including in Omoinotake’s gorgeous official music video for the song, and, if you haven’t yet watched Saezuru Tori wa Habatakanai: The Clouds Gather, you are missing something spectacular.

Sentai Filmworks currently has it on Blu ray.