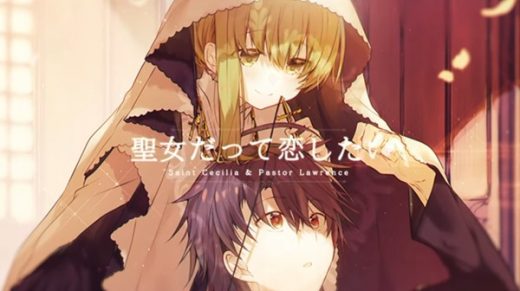 Fans of the popular Saint Cecilia and Pastor Lawrence manga series will be thrilled to hear a new anime adaptation of the fantasy rom-com has been announced today.

The adorably romantic illustration features the anime’s main characters — Cecilia and Lawrence — and it’s obvious just from that one drawing, they definitely have a thing for each other.

Along with the visual, the Saint Cecilia and Pastor Lawrence director was also announced.

The director is Sumie Noro (episode director Tada Never Falls in Love), with Yuka Yamada (Miss Kobayashi’s Dragon Maid) in charge of series composition, and Hiromi Nakagawa (WATATEN!: an Angel Flew Down to Me) as character designer.

Kodanasha is publishing the manga series in English in ebook format, with the ninth volume due out in July.

Saint Cecilia is beloved by the townspeople—not only is she elegant and composed, she benevolently shares her wisdom with all who seek it. That is, until the last person has left—at which point she becomes totally hopeless! Only Pastor Lawrence, is keeping the Saint put together enough to do her duties…and though she may test him, it’s all in a day’s work!

No word yet on when the Saint Cecilia and Pastor Lawrence anime will premiere. We will let you know as soon as we find out.