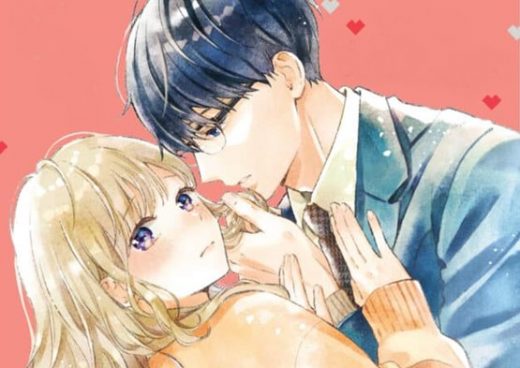 Even though I watch high school romance anime, for some reason I rarely buy manga that centers around that age group.

But, a recent online review of the first volume of the Sakura’s Dedication manga peaked my interest, so I grabbed a digital copy this week.

Sakura’s Dedication (aka 佐倉は私を好きすぎる) is written and illustrated by Fuyu Yukimiya (aka 雪宮 ふゆ in Japanese), and it was those illustrations that first grabbed my attention, as they are utterly utterly adorable.

Sweet and pretty drawings, with protagonist Sawa with her wavy blonde hair not only very cute, but quite a standout compared to how generic so many manga girls of that age tend to appear.

And Sakura himself is an actual hottie!

Something, which you don’t think about for the first chapter of Sakura’s Dedication, as Sakura comes off as just a bland, skinny, high school nerd, with dark hair and glasses and a generic face.

But, when Sawa meets him to go on their first date to the aquarium, not only is Sakura dressed in a stylish, cool-looking outfit, when you look closely at his face — man, is he hot!

Something Sawa herself begins to realize as the manga progresses too.

The plot of Sakura’s Dedication

So, Sakura’s Dedication Volume 1 tells the story of high school student Sawa who has just broken up with her boyfriend, Nakazaki, after she finds out he’s cheating on her.

Classmate Sakura hears Sawa’s conversation with her friend, and rushes over to ask her to be his girlfriend. Of course, she turns him down telling him “You’re not my type”.

Most high school boys at that point would rush away embarrassed, but not Sakura.

Instead, he boldly declares “If I’m not your type, then I will try to make you like me”, and that’s what he sets off to do.

A few days later, and it’s Sawa who is following Sakura around, realizing she might just like him. But now that he’s grabbed her attention, Sakura has to work hard to convince Sawa he won’t treat her badly, like her previous boyfriends did.

Meanwhile, ex-boyfriend Nakazaki has found out Sawa is going out with someone else so, when the nasty rumors he has spread don’t break the two up, he decides to confront Sawa and tell her Sakura will get sick of her soon too.

After all, who wants a girl who is such a gigantic tsundere?

This manga works well not only for the sweet and cute art style that is very pleasing to look at, but because the characters are so believable.

Sawa is a classic tsundere — pushing Sakura away, pulling her hand out of his, refusing to say anything sweet to him — and all because, as Sakura quickly points out she’s ‘love shy’.

Embarrassed about her feelings for Sakura, and not easily able to show them, every time her heart beats just that little bit faster, she responds by pretending she doesn’t care.

Sakura, however, has been doing his ‘love research’, and knows exactly why Sawa behaves as she does — she’s thinking about him too much — and he just thinks that’s cute.

As for Sakura, he is an absolute gentleman.

Sweet, kind, caring and intent on proving to Sawa he not only loves her, but he will take care of her and make her happy. Directly the opposite of what Sawa has been used to from boys in the past.

And, while Sakura’s Dedication is a slow mover, it actually doesn’t feel slow at all.

Instead, it’s just a sweet story about two young people in love.

One already in love and confident in those feelings, and the other in a situation she has never been in before.

That means, while deep down Sawa may love that Sakura so openly gives her compliments and tells her he likes her, she still can’t help feeling uncomfortable as he continues to say the most flowery and “embarrassing” things.

Throw in some funny moments when Sawa is in full-on tsundere mode, and I am already looking forward to the next volume of Sakura’s Dedication as it’s a fun, relaxing read.

By the way, the manga is apparently mangaka Fuyu Yukimiya’s first serialization but, if this is the high-caliber she/he produces, I doubt it will be their last.

You can grab Sakura’s Dedication, Volume 1 (and upcoming volumes as they arrive) via Kodansha. With 2 volumes out in Japanese, hopefully we’ll get the second one in English soon.