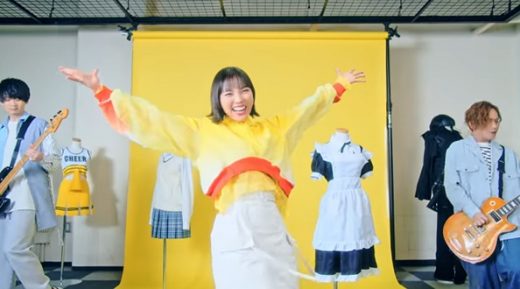 One of the best OPs of the Winter 2022 season is ‘Sansan Days‘ by Japanese pop rock band Spira Spica.

‘Sansan Days‘, of course, is the My Dress-Up Darling opening theme song, and is one of those OPs you never skip as the song is just so upbeat, happy and fun.

And, if that wasn’t enough, Spira Spica’s ‘Sansan Days’ comes with the cutest official music video.

As cute as this might be, as Spira Spica really are an energetic band with an adorable lead singer (Mikiha), what’s even cuter are the live actors who also appear in the video to act out scenes from the My Dress-Up Darling anime series.

Looking like real-life versions of Marin and Goujou, we see Goujou sewing the cosplay outfits, Marin trying them on, visits to a real-life Swallowtail wig shop, Marin being photographed in the outfits and finally dancing at the end of the video with Spira Spica themselves.

It really is the cutest thing.

RELATED: How tall is My Dress-Up Darling‘s Gojou?

So, if you’re looking for an upbeat anime theme song and haven’t yet listened to Spira Spica’s ‘Sansan Days’, do that now in the song’s official music video, and on the creditless version of the anime’s opening animation below.

Meanwhile, the My Dress-Up Darling anime series is streaming now on Crunchyroll.