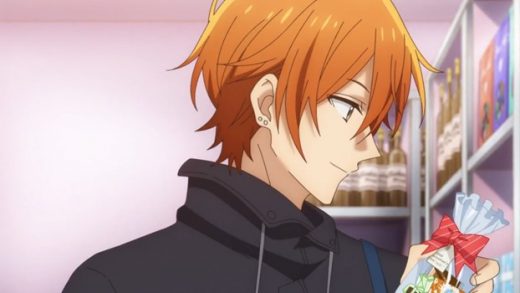 After some hesitation on my part when it comes to the Boys’ Love anime Sasaki and Miyano, (only because 15 minutes in, and the premise just didn’t grab me), I finally re-watched the rest of the first episode last week and became an immediate fan.

Now with Sasaki and Miyano, Episode 2, “Someone I Like“, these two lovely guys have quickly cemented their way into my heart.


So, let’s get right down to this week’s Sasaki and Miyano, Episode 2 recap and review. Yep, I’m a little behind, but I promise I will quickly catch up.

Episode 2 is called ‘Someone I Like‘, and turned out to be even better than the first one.

The second episode starts off with Sasaki wanting to travel home on the train with Miyano, but being told Miyano was going to the bookstore instead.

Not being good at taking no for an answer, Sasaki tags along behind Miyano asking “Are you going to buy BL manga?”

When Miyano admits he is, Sasaki decides to go with him, only to be shouted at by Miyano “You try standing in front of the BL shelf with another guy!” 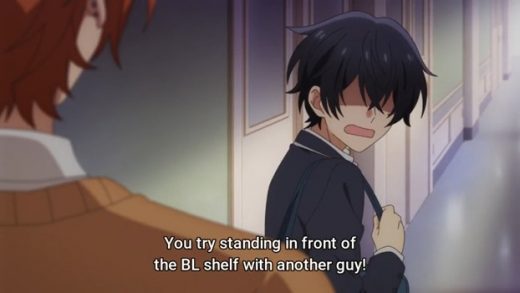 Of course, Sasaki isn’t the type of guy who cares what other people think, but he still comes up with a suggestion to make Miyano feel a little happier “I’ll stand at another shelf then”.

At school the day after, Sasaki stops by Miyano’s classroom to borrow another Boys’ Love manga, and Sasaki asks him an interesting question —

“How can you want to read them without being a fudanshi?” (Fudanshi, or 腐男子 in Japanese, meaning someone who likes manga about romantic relationships between men).

Sasaki calmly responds, “If there’s someone I like, I want to get to know them”, causing Miyano to blush furiously and push him out of the classroom, while the rest of the class looks on.

Nope, Sasaki definitely doesn’t mind saying what’s on his mind, or admitting when he likes someone.

Later on, Miyano is outside the classroom listening to something on his MP3 player. Sasaki arrives, grabs one of the headphones and listens in, only to hear a Boys’ Love drama being played out.

Shy Sasaki freaks out, shouting “It’s not what you think. I’m not walking around listening to this” — but, come on, who is he fooling?

After all, he is obsessed with the Boys’ Love genre, yet is still denying it. Both to himself and others.

Sasaki just comments, “Are you crazy, listening to that here?” 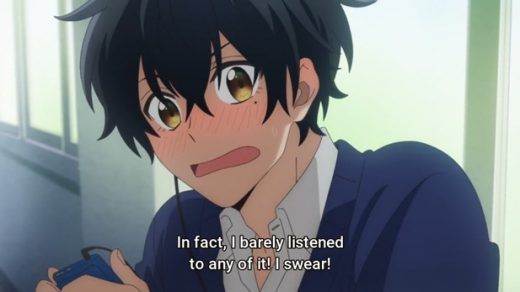 Sasaki, of course, is still pushing himself on Miyano, and arrives in his classroom when nobody is there and offers him a less sweet flavor of Pocky.

But, instead of giving the Pocky to Miyano and letting him eat it himself, he holds it out so he can take a bite.

Something Miyano eventually does, while the art style softens romantically, and flowers float through the air. Awwwwww.

As he bites down the Pocky stick and nears Sasaki’s hand, however, he stops and says “Um… it feels a little awkward getting near your hand, could you just let go?” 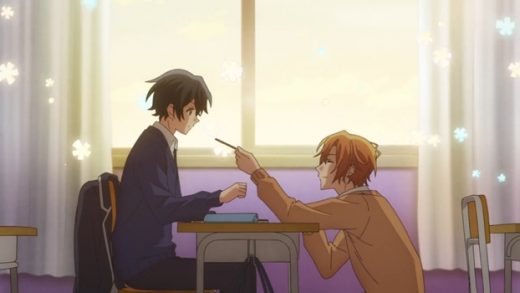 The scene then changes to Sasaki in the bathroom staring into the sink and asking himself, “Does he have no guard up? Did he let it fall?”

He then falls to a crouch saying to himself “It’s getting so bad. But he’s so damned cute. The next time I hug him, I’m going to squeeze him too hard”.

Yep, Sasaki has it bad, and he’s not even trying to hide it any more. 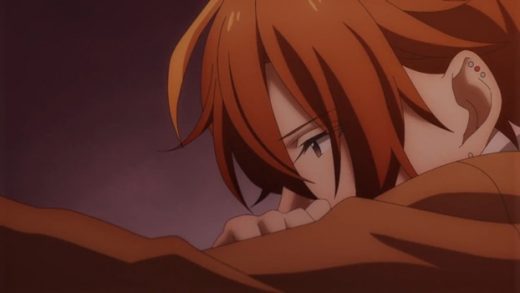 In the classroom, another boy is teasing Miyano about his relationship with Sasaki, and hinting that he’s scary.

But Miyano’s friend jumps in to say “Sasaki-senpai is a good person. When I was getting beaten up last year, he’s the one that saved me”.

After the two boys have gone, Sasaki appears again and this time asks about Miyano’s friend Hirano.

Hirano, however, is in a relationship as Miyano explains. He is a uke (受け or the submissive half of a gay couple), and already has a boyfriend.

Read and listen: Sasaki and Miyano‘s opening theme song is perfect for this lovely anime

Sasaki then inquires how Miyano began reading Boys’ Love manga, and he explains he found an interesting looking manga when he was shopping for a reference book, but didn’t realize it was a BL manga until he got it home and read it.

One of the final scenes shows the two boys looking at a chocolate display for Valentine’s Day, and Sasaki saying they should both buy some and exchange them with each other.

Does Miyano think that’s a good idea, or does he want nothing to do with it?

You’ll have to watch Sasaki and Miyano, Episode 2 to find out. 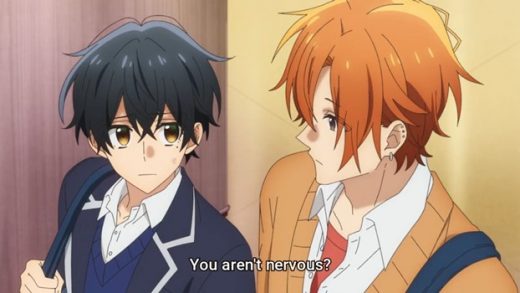 The pacing of the second episode of the Boys’ Love anime has sped up pretty fast as, last week, Sasaki was only beginning to question his feelings for Miyano.

This week, he is all in.

I am also guessing there may be some tough times ahead for the senpai, however, as Miyano is not on the same page as Sasaki (yet!) and, to some extent, is either actively fighting his feelings or still pretending just because he enjoys BL manga, that doesn’t make him gay.

But, as their school is an all-boys school, other relationships between boys are already a thing, so a relationship between Sasaki and Miyano would not be that unusual.

As for the episode itself, the art style is utterly stunning — easily one of the best of Winter 2022 — the soft piano music used in a number of scenes is lovely and touching, and the plot interesting and fun.

Miyano, on the other hand, is timid and shy but still has courage when he needs it too, as he argues vociferously with anyone whose opinion angers or freaks him out.

All in all, these two make an interesting couple — they get along well and their personalities fit wonderfully. Opposite enough to be interesting, but similar enough to mesh.

Especially as, while Sasaki is certainly outspoken and aggressive, he is the one who has already allowed Miyano to get into his heart.

That means, I’m guessing, it could be Sasaki that gets hurt much more easily than Miyano, should anything go wrong.

Watch Sasaki and Miyano, Episode 2, “Someone I Like‘ on Funimation. This anime really does get better and better.

Read: Sasaki and Miyano the first episode — so romantic