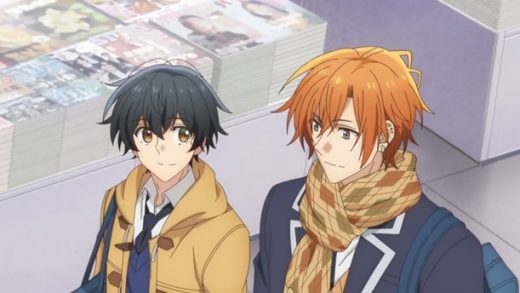 We start Sasaki and Miyano, Episode 3 “Senpai Is…” with the certainty Sasaki is crazy about Miyano.

Unfortunately for him, it still seems Miyano is either completely oblivious to Sasaki’s feelings or, because he is terrified of being perceived to be gay, is actively ignoring them.


Strange behavior coming from someone obsessed with Boys’ Love manga, but there ya go!

With all that in mind, I started my viewing of Sasaki and Miyano, Episode 3 eager to see how Miyano handles Sasaki’s increasing feelings for him.

Will he ignore him, pretend he is misunderstanding how Sasaki is behaving, or actively push him away?

The first scene of Sasaki and Miyano, Episode 3 has Sasaki inviting Miyano to have an early morning hot chocolate with him, as he waits for Hirano to tutor him. 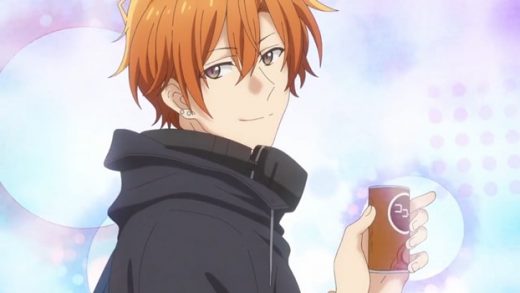 Of course, that hot chocolate leads to Miyano asking if Sasaki is ‘clumsy in kissing’ after Sasaki burns his tongue on his hot chocolate.

Sasaki’s response, “Want to find out?”

In typical Miyano fashion, as he doesn’t seem to be remotely capable of admitting his feelings to himself, he shouts at Sasaki, “I’m not looking for a BL experience!”

Sure, he’s not, as he spends hours every week reading BL manga, lends Sasaki every new manga issue he buys, and is constantly wondering what Sasaki is thinking and feeling.

Read: The Sasaki and Miyano OP is such a fabulous song — Listen!

The episode then dissolves into Sasaki thinking how much he just wants to touch Miyano, because he is “so cute”, and Miyano arguing with himself inside his own head as to why he didn’t mean he wanted to kiss Sasaki.

Surely, though, Sasaki’s comments asking Miyano if he wants to go out, saying he enjoys learning about the things the people he likes like and, of course, the kissing comment couldn’t possibly mean Sasaki is looking for a BL moment. 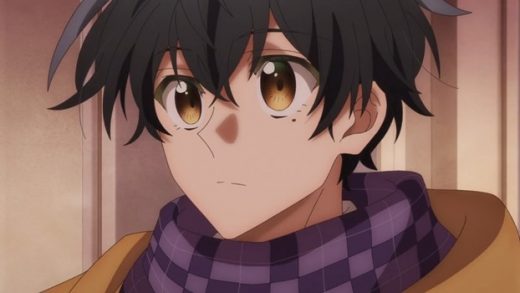 Things become even more convoluted when Miyano takes a manga to Sasaki’s classroom to lend to him, and hears Sasaki in a conversation with a classmate.

The classmate is asking him why he is reading Boys’ Love manga. Doesn’t it bother him that it’s between two guys?

“Why should it?” responds Sasaki. “I think it worked perfectly for this type of story”.

This leaves Miyano even more confused as, while he feels bad for having put Sasaki in that position by lending him the BL manga, he realizes how cool Sasaki actually is and how little he cares if others think he is gay.

For someone like Miyano, who worries about every small thing, this almost elevates Sasaki to ‘God Status’, he now admires him so much.

But, when Sasaki appears in his classroom the following day and asks if he wants to go with him to the bookstore that night, Miyano has trouble responding as he is still worrying about Sasaki being subjected to mean comments because he is reading BL manga.

Seriously, you have to wonder why Miyano sees exactly what’s going on — Sasaki could not care less what somebody says to him — but still refuses to admit Sasaki can take care of himself.

Or, is it because he does having feelings for Sasaki, but pushes them down, swopping them out for feelings of ‘concern’ instead? 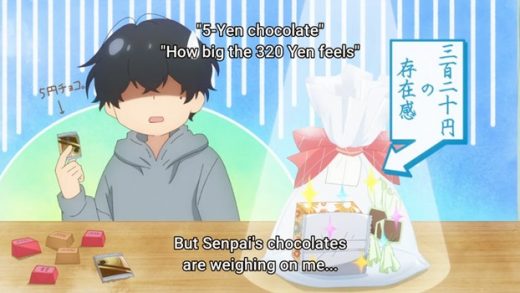 Miyano’s next dilemma is should he give Sasaki chocolates on White Day?

White Day, you may not know, is when boys give chocolate to the girls who gave them chocolate on Valentine’s Day. A day of appreciation, you might say.

Sasaki gave Miyano chocolates on Valentine’s Day, but Miyano didn’t do the same and now he feels beholden.

Or, at least, that is what he is convincing himself is true. As he couldn’t really want to give Sasaki chocolate because he likes him, now could he? 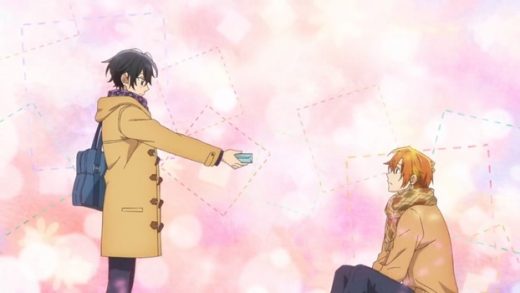 But, he plucks up courage and gives chocolate to Sasaki anyway, while making every excuse he can think of to Sasaki why this isn’t romantic at all.

Poor Sasaki does not know what to do, as he is presented with the gift he wanted on Valentine’s Day, but didn’t get.

Now he seems frozen to the spot. Getting what he wanted, but not sure how to feel about it or what it really means.

Finally, he accepts the gift, then rushes off to get a snack for Miyano from the snacks being eaten at a classroom party his classmates are currently having. Not because he thinks Miyano needs a snack, but just because he needs to get away from him so he can sort out his feelings.

When he gets back to his classroom, Sasaki sinks to his knees as his heart is pounding so fast, it’s about to jump out of his chest.

Towards the end of the episode, we eventually find out why the boy, Ogasawara, was harassing Sasaki about reading BL manga.

It isn’t that he cares about people being gay, it’s just that his girlfriend also loves BL manga, and now he’s worried.

That’s because, he loves her so much, but does that mean she has wanted him to get with a dude the entire time they have been dating?

See, ‘normies’ just don’t get Boys’ Love, why it’s so appealing, or why some girls like it, and that’s pretty obvious here.

Sasaki then decides he is leaving his friends and heading to the bookstore with Miyano, leaving Ogasawara asking why he’s going. 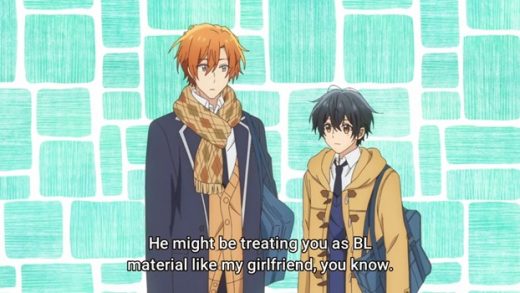 Sasaki seems disappointed when Miyano says he has never thought about him that way.

Sasaki and Miyano Episode 3 ends with the two boys on the train heading home, and Miyano falling asleep while leaning against Sasaki.

The episode ends on a cliffhanger just to leave fans eagerly coming back for more and, boy, what a lovely cliffhanger it is.

But you will have to watch it to find out. 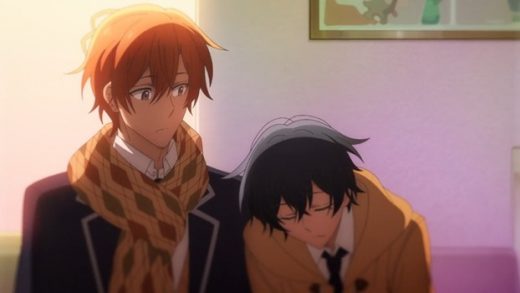 Now, I would watch this anime if I hated the characters, if the story was garbage and if the music grated on every one of my nerves, simply because the art style in it is stunning.

So much so, I found myself stopping Sasaki and Miyano Episode 3 every couple of minutes just to oggle at how beautiful every scene is drawn.

Even more so when we see Sasaki realizing he is falling in love, and how the softness of the art and the visual effects as flowers or pulses of light float across the screen make every second stunning.

As for the story, it couldn’t be lovelier, as it is all done in such a soft, sweet, romantic way.

The way many of us remember how we felt when we realized we were falling in love for the first time, and that every tiny thing the other person does simply lights up the world.

Sasaki and Miyano themselves, just three episodes in, have quickly become two of my favorite anime characters ever. But especially Sasaki.

A kind, sweet guy who knows who he is, and knows what he wants but is still brought to his knees by the force of his own emotions.

Sasaki and Miyano, Episode 3 was my favorite episode yet. But why do I think they will still get better from here?

Watch Sasaki and Miyano via Funimation, and check out the recaps/reviews for the first two episodes of this superb anime on Leo Sigh — Episode 1 and Episode 2.