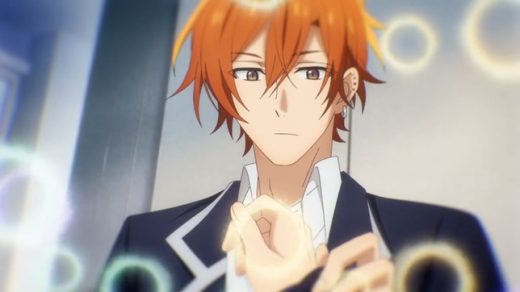 As Sasaki and Miyano become ever closer, we head into Episode 4 with Miyano having dozed off on the train, only to hear Sasaki whisper in his ear “I like you” as he wakes up.

That sets Sasaki and Miyano Episode 4 up for either Miyano pretending he misheard (because that is what those in denial will often do), or having to think about his own feelings towards Sasaki.


Now which one will it be? 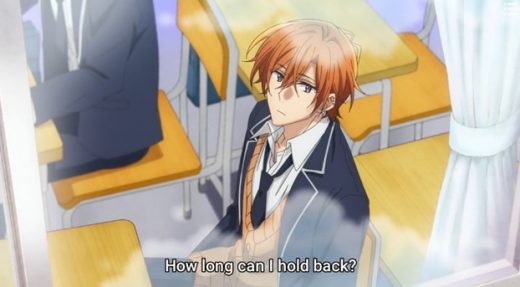 The episode begins with both boys realizing there is only a year left, and Sasaki will be graduating while Miyano will still have one more year of school left.

Then, when Kuresawa tells Miyano he saw Sasaki working at a bakery during the school vacation, Miyano realizes how little he knows about his Senpai, as all they talk about is manga when they are together.

Miyano is also confused, as he hasn’t seen Sasaki since he heard him say “I like you”, and now he is worrying how to behave around him.

That problem solves itself, however, when the two boys meet on the train the following morning, and Miyano realizes they talked just like they always do. 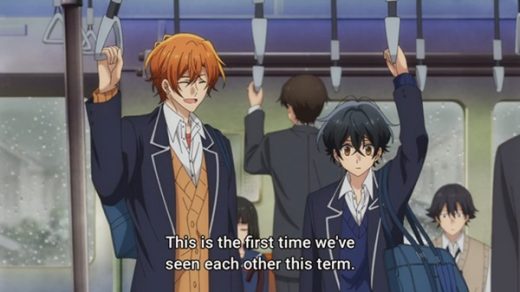 Later, the two boys are talking in the corridor when Miyano gets accidentally pushed by another boy, and ends up being knocked towards Sasaki, with his hand slamming into the wall.

Sasaki notices he hurt his wrist as his hand hit. But, as Sasaki holds his arm up to look at his wrist, Miyano realizes how beautiful Sasaki looks, then remembers him saying “I like you” on the train and blushes.

Back at home, Miyano is beginning to picture Sasaki in a typical Boys’ Love situation, and panicking as “I’m not into boys”.

Meanwhile, Sasaki has left school early saying to his friends “It’s just too much”.

Having Miyano so close to him, and not being able to touch him.

The day afterwards, Miyano is in the classroom when a worksheet blows out of the window and he heads outside to pick it up.

As he finds it, he realizes the paper is on the ground next to Sasaki’s friend Ogasawara, who is on the phone arguing with his girlfriend about Boys’ Love manga.

Ogasawara does not understand her love of Boys’ Love, and thinks it threatens his own masculinity, so the couple has been fighting for two months.

Miyano gives him advice, saying it doesn’t really matter if she reads Boys’ Love manga because, if she is going out with Ogasawara, she obviously likes him.

Ogasawara then asks about Miyano and Sasaki being ‘boyfriends’, which Miyano vehemently denies.

But as Miyano muses about his own short stature, and Ogasawara reaches forward to pat his head after telling him he will grow taller, Sasaki is walking in the corridor, hears Miyano’s voice and sees a stranger’s hand heading towards his beloved’s head. 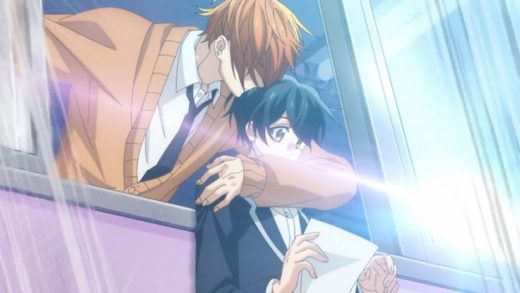 Leaping into action, he drags open the window and grabs Miyano around the chest, pulling him towards him and away from the person about to touch him.

Then he realizes it was just Ogasawara. 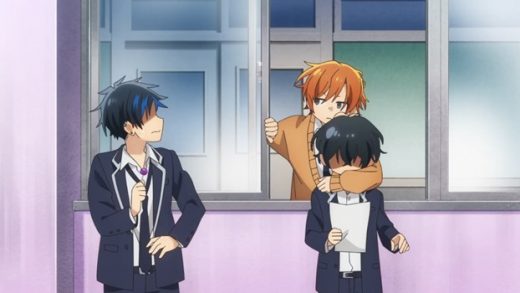 Ogasawara just stares at Sasaki wondering just how “blatant” he could possibly be about his feelings for Miyano.

Miyano leaves but, as he is heading back to his classroom, he begins to wonder if he does like guys after all. Especially because, when he thinks about Sasaki, his chest tightens and his heart hurts.

Meanwhile, Sasaki is back in the classroom and realizing how much trouble he is in with his feelings for Miyano, as no matter how he tries he cannot fight them. 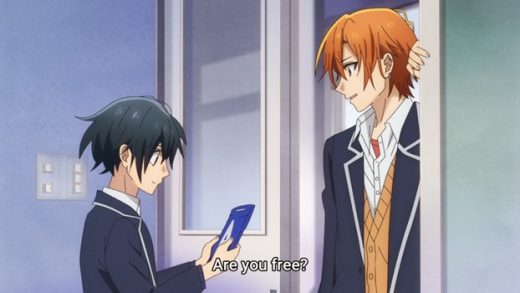 Sasaki is already a lost cause when it comes to Miyano, as he couldn’t love him more if he tried.

At the same time, Miyano is beginning to realize his feelings for Sasaki are heading out of the realm of friends, and into something else entirely.

All of this is dealt with, not in the typical high drama way of many BL anime, but in the way it often would be in real life. Both boys being confused, with one (Sasaki) realizing he cannot fight his feelings and the other (Miyano) trying to pretend he doesn’t feel the same way but also admitting to himself he is failing.

As usual, Sasaki and Miyano Episode 4, “Limit” is stunning in both visuals and sound — with every scene framed around a soft, hazy palette but with the characters in bold vibrant colors standing out against that backdrop.

Just like they would if you suddenly realized you were in love with someone.

Meanwhile, the gorgeous piano and orchestral soundtrack in the background serves to magnifying every glance and every emotion.

And, while the story moves lazily along, the pacing is fast enough it keeps you enthralled with every conversation and every scene.

Read: I really want a full-length version of the Sasaki and Miyano ending theme

What is still so wonderful about this Boys’ Love anime are Sasaki and Miyano. Two boys heading into uncharted territory when it comes to love, but neither of them reacting with anger, shame or revulsion, as their feelings for the other grow.

But instead, just confusingly trying to figure out how they feel, and what they plan on doing about that. If anything.

With Sasaki’s feelings growing so quickly, however, he is heading towards trouble quickly. Or at least towards a confession Miyano may not take so well.

Honestly, I have not enjoyed a Boys’ Love anime this much since I watched Sekai Ichi Hatsukoi – World’s Greatest First Love. My favorite BL anime ever, and one I watched through back-to-back three times.

If Sasaki and Miyano continues to be as touching and sweet as every episode so far, I will likely be doing the same with this.

Sasaki and Miyano is streaming now via Funimation.