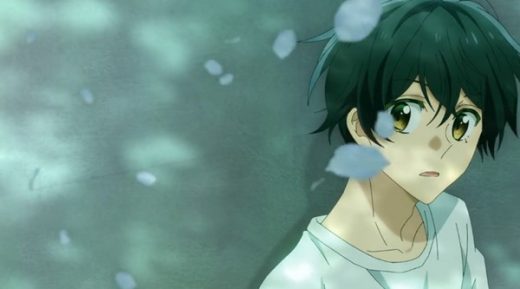 Sasaki and Miyano, Episode 5, “Bit by bit” begins with school sports day and Miyano proving to be surprisingly fast in the 1,500 meters race.

But, as he goes to wash his face in cold water on the hot day, he bumps into Sasaki who, as always, looks cute and sparkly to him. Although, of course, Miyano won’t admit that to himself.


The two boys take a break and sit down in the shade next to the school building, where they talk about the sports events they have just participated in, and Miyano realizes he is talking to Sasaki ‘normally’.

Even if he did hear him say “I like you”, and was confused.

And it’s then Miyano decides he must have misheard Sasaki on the train.

After all, when a boy is confused about a confession he heard, he is likely to try to persuade himself otherwise, right? 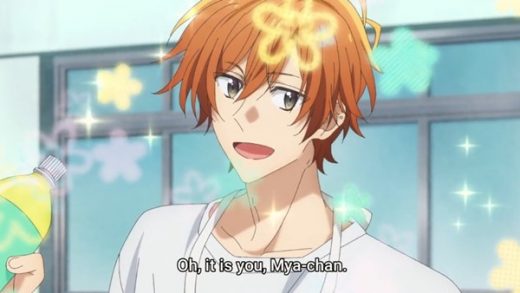 Until, of course, Sasaki begins to talk about the Boys’ Love manga they both like and begins to think how much he loves talking to Miyano, and doesn’t want this to end when he graduates.

And that’s when Sasaki confesses to Miyano. 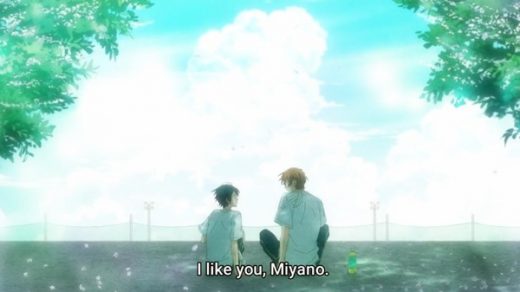 (And can I just stop right there, and say just how stunningly beautiful the art style in Sasaki and Miyano is, and how wonderfully each frame is drawn.

From the way Sasaki’s confession is seen from behind, in the distance, to how Miyano looks over at Sasaki as time slows and flower petals drift past his face on the breeze.

Every frame in this lovely anime is utterly, utterly stunning.)

Once the confession is out, though, Miyano is stunned and cannot seem to respond at all. Leaving Sasaki to tell him he doesn’t need to rush with his answer. “I’ll wait. But I’d be happy if you gave it some thought”.

But even Sasaki is taken aback when Miyano shouts right back, “I will. I will”.

As Miyano leaves and Sasaki sinks into embarrassment at how nervous he was, he is shocked to find Miyano standing before him again.

“Can I ask, Senpai, what do you like about me?”

And it’s then Sasaki makes his mistake. 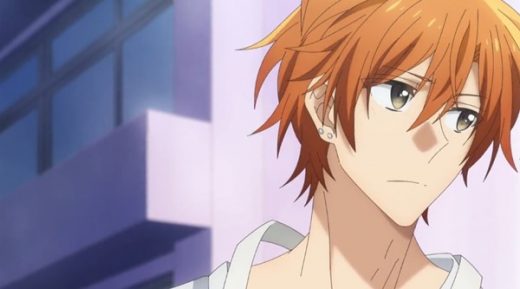 Later on, Miyano is remembering just how much he always hated people loving his face as, in his mind, he looks like a girl.

The day after, Miyano has a cold but is still in a student meeting with Hirano. After the meeting, as he helps Hirano with office work, he falls asleep right before Sasaki arrives.

Hirano asks Sasaki if he will watch over Miyano and, when he wakes up, tell him he should just go home and rest.

But, as he waits, Sasaki imagines himself kissing Miyano through the mask he is wearing, and wonders if it would be okay. 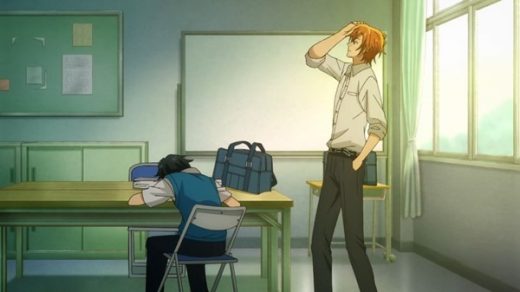 Miyano wakes up as Hirano comes back, and is told to go home. But, after he has gone, Hirano asks Sasaki “Did you do something to Miyano? He’s acting strange?”

It is then Sasaki admits he confessed his feelings to Miyano — but… he didn’t do it correctly.

Hirano tells him he should call Sasaki and tell him the right way but, as Sasaki doesn’t have Miyano’s phone number, he lends him his own phone to call him.

Sasaki and Miyano Episode 5 ends with Sasaki calling Miyano to tell him how he feels.

You will have to watch the anime to find out just how that went. 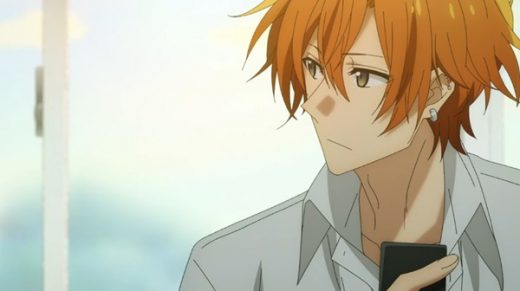 I am bowled away by how even more beautiful this anime becomes with every new episode.

Not only with the scenes featuring the protagonists, but the ones where they hang out with their friends, in soft almost misty walks down school corridors and in those frames where the school cat appears yawning, playing with flowers or sleeping.

What is even lovelier about this Boys’ Love anime is everything is carried out in such a sweet and innocent way, between boys who are kind and friendly and lovely and, even when one has confessed and the other has heard the confession, none of it ever devolves into meanness or rudeness.

The characters themselves are being beautifully developed with each new episode, as we learn a little more about Sasaki and Miyano, but also about their school mates.

People who are just as nice as they are, and people who, even if they aren’t gay themselves, don’t seem to have a problem with gay relationships.

Whether Sasaki and Miyano end up together, we will have to wait to find out.

But, even if they don’t, (and I think they will), can’t you just imagine these two wonderful boys having a lifelong friendship anyway? Regardless of how they feel about each other.

Watch Sasaki and Miyano, Episode 5, “Bit by bit” on Funimation.

Recaps and reviews of the first few episodes are also here: