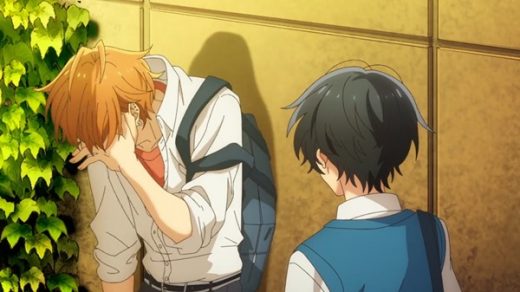 I don’t know if it was just me, but Sasaki and Miyano, Episode 7, “I Don’t Want to Pressure Him” felt a little disjointed.

Not that it made me dislike the series, but it just seemed a bit all over the place.

That being said, though, that Sasaki and Miyano almost kissed (finally!) did make my heart jump a little bit. 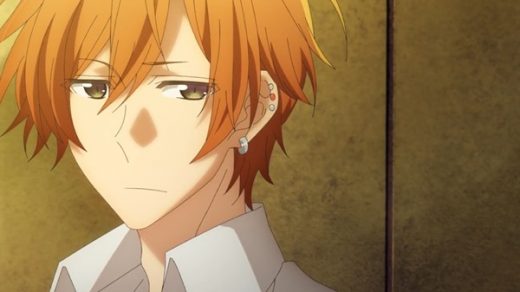 Sasaki and Miyano, Episode 7 recap “I Don’t Want to Pressure Him“

Sasaki and Miyano Episode 7 begins with Miyano chosen as the person to represent his class in a cross-dressing competition.

Not something he was happy about, obviously, due to his hang-ups about his overly feminine face.

But, when he goes to complain to Hirano, he gets into a weird card game with Hirano and the Chairman of the Discipline Committee, with the loser being the person that is forced to lock the classroom.

As Sasaki passes the classroom the other boys are in, he sticks his head in looking for Miyano, and ends up being drawn into the card game.

Like you might expect, Miyano loses, and so is the one that must stay behind to clean. Sasaki stays with him to help.

But, on the way to the staff room to hand in the key when Miyano asks him if he also wants to speak to a teacher, Sasaki calmly replies “No. I want to see the person I like”. 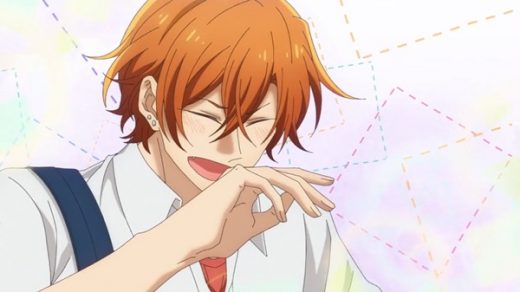 Miyano reacts in a shocked manner. So much so, Sasaki cannot help himself laughing at his reaction.

The two boys then walk home together, with Sasaki stopping at a mall to get a drink, and Miyano waiting outside.

It is then he bumps into the girl he used to like in middle-school. The one that told him she wanted him to dress up in girl’s clothes because he looked like a girl.

A scene that is beautifully written, as you quickly realize Miyano’s idea of ‘like’ with a girl probably isn’t quite the same type of ‘like’ he had built it up in his head to be.

Soon, Miyano finds out he had made a mistake thinking the girl was making fun of him, as she tells him she asked him to do that because, as an artist, she wanted to paint him.

The girl then talks about how much taller Miyano has become, and how his hands look like men’s hands instead of like a girl. 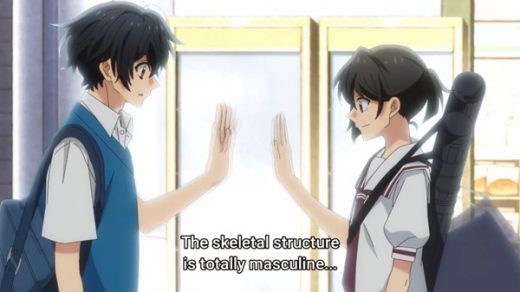 But, as she is holding up her hand against Miyano to measure them, Sasaki appears, sees the two looking like they are about to touch, and grabs Miyano pulling him away from her saying “Don’t”.

He then drags him away from the girl, and into a quiet area of the shopping mall.

Once there, and over his panic, Sasaki apologizes to Miyano and then asks him, “That was the girl you mentioned you liked, right?”

Related: Why Sasaki would be the perfect boyfriend — really, he would!

Sasaki looks heart-broken and Miyano is shocked, but then replies “The girl I used to like. I don’t like her anymore”.

At that, Sasaki sinks back against the wall in relief, then says “I’m so sorry. I didn’t hurt you when I pulled you away, did I?”

Miyano tells him he didn’t, and then adds “I’m a guy anyway, so that wouldn’t hurt”.

But Sasaki, still feeling bad about what he did, explains “It’s not about gender. I don’t want to be rough with someone I like”.

Of course, Miyano is immediately embarrassed and blushes to the roots of his hair. This just makes Sasaki love him even more.

But, as he moves towards him to kiss him, three boys run past shouting about missing their train and Sasaki leaps back in surprise.

To end the day, Miyano tells Sasaki he just found out he had been mistaken about the girl making fun of his face. She had just wanted to paint him. 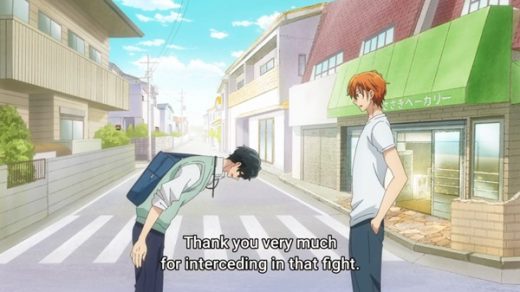 The rest of the episode covers Sasaki at his family bakery and bumping into Kuresawa, who is on his way to see his girlfriend in the hospital.

While they’re talking, Kuresawa thanks him for saving him in the fight he was in, but then explains it was his fault as he said something bad to the boys.

In the final scenes, Sasaki meets Miyano on the train, and the pair listen to music on Sasaki’s Mp3 player.

Once at school, however, Sasaki tells Miyano he bought the second manga in a series that Miyano had let him borrow, and Miyano is so happy that his Boys’ Love manga had been so well-received, he thanks him for doing that.

But… of course, things always end up a little weird for Sasaki, and they did here.

You’ll have to watch Sasaki and Miyano, Episode 7, “I Don’t Want to Pressure Him” on Funimation to find out what that was. 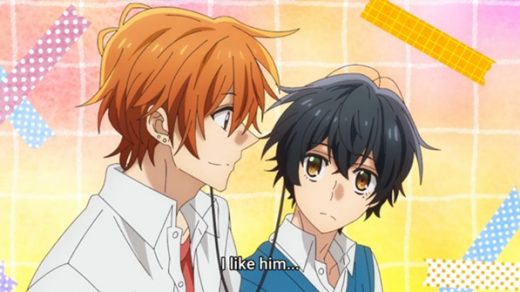 Sasaki and Miyano, Episode 7 review “I Don’t Want to Pressure Him“

While this week’s episode did feel a little disjointed, as if it was covering too many things at once, it was nice to get an explanation about the girl Miyano supposedly liked in middle school.

The one he found “easy to talk to”, until he thought she was making fun of him looking like a girl.

In reality, though, it seems obvious Miyano didn’t really like her in the way heterosexual boys like a girl, but instead just felt comfortable around her.

It also seems obvious Miyano is slowly beginning to wake up to his real feelings for Sasaki, considering he spends so much time thinking about him in just about every conceivable situation.

Sasaki, on the other hand, while he keeps telling Miyano he can take his time thinking about his reply to his confession, you can see the lack of a reply is starting to work on his nerves. Particularly as his feelings for Miyano just continue to grow, and he doesn’t have any outlet, ie: a relationship, in which to deal with them.

Again, though, it is dealt with in a way where you just know what a lovely guy Sasaki is, and how he is trying his best to be patient, and that just makes you like him even more.

As for the show itself, God, it is a gorgeous thing.

From the wonderfully developed characters, to the lovely piano music that plays throughout, the soft colors, the utterly beautiful art style, and even the backgrounds with the stunning color palette and intricately designed details. Everything in this anime is perfection.

Seven more days until the next Sasaki and Miyano episode releases then, eh?

I think I am as impatient as Sasaki waiting for Miyano’s reply.

You’ll find more about Sasaki and Miyano on Leo Sigh.