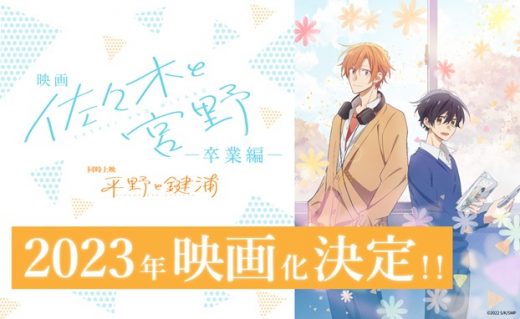 When the first season of the Sasaki and Miyano anime TV series ended earlier this year, there were more than a few devastated fans. Myself included.

After all, wasn’t it lovely to welcome these two fabulous guys into our living rooms every week, and watch as they fell in love?


But, now that Miyano has finally admitted he loves Sasaki, and the pair are enjoying their relationship together, we can at least imagine how happy they must be.

Well… actually, we don’t have to.

That’s because a Sasaki and Miyano movie has just been announced. A movie that will allow us to check back in with our favorite guys, and see how they are getting along.

RELATED: Who voices Miyano in Sasaki and Miyano TV anime?

Sasaki, remember, has already graduated high school, whereas Miyano, who is a year younger, still has another year to go.

Graduation then will be important for both of them. Especially as, by the time Miyano graduates, they will have been separated, at least during their school lives, for a year.

Along with the film, a spin-off short film called Hirano and Kagiura is also in the works, and will air alongside the movie.

That, of course, will get us up-to-date on the relationship between Sasaki’s now-former classmate Hirano, and his roommate, and popular basketball player Kagiura.

The Sasaki and Miyano film was announced on the show’s official Twitter account earlier this week, with the comment it will be released some time in 2023.

Can’t wait, how about you?

RELATED: Who voices Sasaki in the BL anime series Sasaki and Miyano? One of Japan’s craziest actors