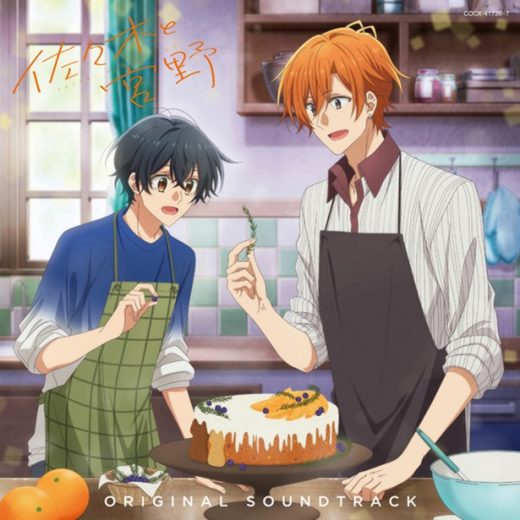 I have been in love with the Sasaki and Miyano soundtrack since the first episode of the Boys’ Love anime aired in January, 2022.

So much so, I am stunned the soundtrack has received such little play on Spotify and other music streaming platforms.


Especially as the anime starring two adorable boys was one of the most popular of the Winter 2021 season.

After all, every single piece on the Sasaki and Miyano soundtrack is utter perfection.

From the ethereal opening with its almost angelic choral voices and haunting violin (track #1 on the soundtrack), to the jaunty, upbeat music as the two boys walk to the train station together.

From the Sasaki and Miyano main theme (#3 on the soundtrack) that begins with a soft piano and then morphs into a sweet and happy sounding flute and violin-driven piece that seems to encapsulate how Sasaki feels every time he sees Miyano, to ‘Mabataki‘ the anime’s opening theme song by Miracle Chimpanzee (TV edit #2 on the soundtrack).

And, of course, ‘I don’t want to hurt you‘ (#17 on the second disc) – which illustrates Miyano’s thoughts about Sasaki, as he realizes he isn’t sure if he likes him, but doesn’t want to devastate him.

Or Sasaki’s feelings about Miyano, as he knows he is in love but doesn’t want to push his feelings onto a boy that may not want them.

And, one of my absolute favorites, ‘Hikarete Iku‘ (#10 on the soundtrack), with its cascading piano and soaring violin — just beautiful — and played as Miyano gets home and wonders if he interacted with Sasaki like he normally would, now that he heard him whisper “I like you” on the train when he thought Miyano was asleep.

The Sasaki and Miyano soundtrack was composed by Kana Shibue (profile on MyAnimeList).

You may know her equally gorgeous music from the soundtrack of Shouwa Genroku Rakugo Shinjuu (a stunning piece of work), Devil’s Line or Shenmue the Animation.

The Sasaki and Miyano soundtrack has 43 tracks on two discs and, let me just say, I have played the thing on repeat over and over again as it is just full of such sweet and lovely pieces of music that playfully stay in your head long after the last note ends.

You can listen to the Sasaki and Miyano soundtrack on Spotify (player below) — and please do over and over again, as Kana Shibue deserves so many more plays than this — or, of course, buy the digital version on Amazon and other digital music platforms for $15.98.

Something I just did as, heaven forbid, it disappears from streaming platforms and I can no longer listen to it.

The Sasaki and Miyano anime, of course, is currently streaming via Funimation.