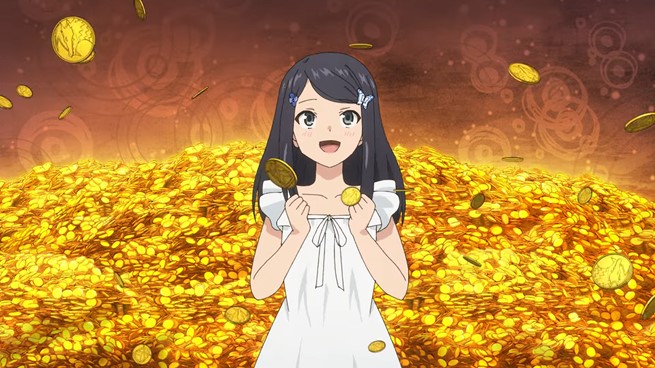 A Saving 80,000 Gold in Another World for My Retirement creditless opening animation was released soon after the anime’s first episode aired in Japan on Sunday night.

An episode that streamed via Crunchyroll in most regions soon after.


The Saving 80,000 Gold in Another World for My Retirement creditless opening animation features protagonist Mitsuha Yamano, a young woman who is transported into another world after she is pushed off a cliff.

It not only shows how cute Mitsuha is, but the animation also introduces us to many of the people she meets in her isekai world.

The animation also includes a snippet of the Saving 80,000 Gold in Another World for My Retirement opening theme song — ‘Hikatta Coin ga Shimesu Kata‘ performed by Kaori Maeda.

Maeda, of course, also voices the character of Sabine in the anime series.

The anime is being directed by Hiroshi Tamada (don’t hold it against him that he was Assistant Director on 2020’s abysmal Gibiate), with series composition by Akihiko Inari (Inazuma Eleven: Saikyou Gundan Ogre Shuurai), and character designs by Yuki Fukuchi (Plunderer) based on the original designs by light novel author FUNA (Didn’t I Say to Make My Abilities Average in the Next Life?!).

Saving 80,000 Gold in Another World for My Retirement features light novel and manga series

When Sol Press lost their English language rights to the light novel series and manga of Saving 80,000 Gold in Another World for My Retirement after failing to pay their taxes and being shut down, Kodansha took over the license for both.

Kodansha has this to say about the plot:

After growing up an orphan, Mitsuha has a healthy respect for money and a desire to live well–at least, until she dies after being pushed off a cliff. Waking up in a strange fantasy world, Mitsuha narrowly survives an encounter with a pack of wolves, then realizes she has the power to move between this world and the real one. A lesser person might embark on heroic adventures–Mitsuha instead immediately recognizes the lucrative possibilities of her new situation, and heads out to buy an arsenal of modern weapons. Her goal: to acquire 80,000 gold, and the life of leisure she’s always dreamed of!

Watch the just released Saving 80,000 Gold in Another World for My Retirement creditless opening animation below. It is very cute.

Meanwhile, episode 2 of the isekai anime will be out next Sunday. So far, I am enjoying the series.