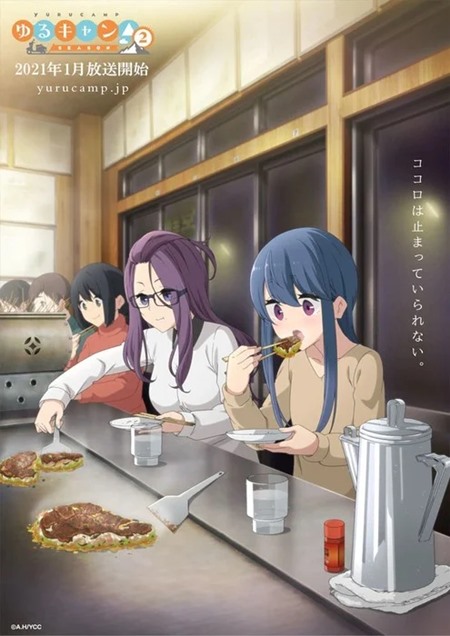 Yoshiaki Kyougoku, the director of Laid-Back Camp Season 2, made a commitment to release five key visuals of the upcoming season in the next few weeks.

After all, he doesn’t want fans to have to wait too long to get new material featuring the girls we all love.

Last week we got the first Laid-Back Camp Season 2 key visual, which featured an adorable Nadeshiko and her old friend Ayano when they were still middle-schoolers.

This week, it is time for the second Laid-Back Camp Season 2 key visual, this time featuring Nadeshiko’s older sister Sakura and Rin at a restaurant looking as though they are enjoying eating Japanese pancakes (okonomiyaki).

Laid-Back Camp Season 2 is due for release in January, 2021. All our favorite characters (and their voice actors) are returning. It will also feature new character Ayano, played by Tomoyo Kurosawa (O Maidens in Your Savage Season).

Check out the second key visual above, and stay tuned for the third in the five key visuals from the upcoming anime, probably some time in the coming week.