If there is one anime theme song that has been on repeat this week, for me it is ‘Shinkai‘ by Eve — the theme song for the upcoming film Josee, the Tiger and the Fish.

Because that song is not only an absolute earworm and as addictive as hell, it also has one of the most beautiful animated music videos I have seen in a long time.

The animation for Eve’s ‘Shinkai’ video was created by the amazingly talented Japanese animator Mari Yasu, whose art style in this is stunning.

So much so, you could stop almost every frame of the video and immediately have a piece of art so lovely, you could print it out and hang it on the wall.

Mari Yasu is also the same person who animated Eve’s equally beautiful music video for ‘Inochi no Tabekata‘ (aka How to Eat Life) earlier in the year. 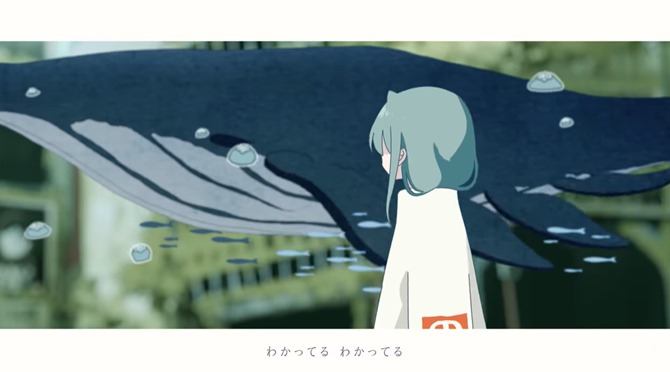 Eve’s ‘Shinkai‘ music video features a young girl wandering around a derelict underwater city alone. As she walks she watches fish and a whale swim by and then bumps into an enormous white cat.

Eventually, she discovers an old train but, when she looks inside, the face of another girl is looking out at her.

As she tries to board the train to reach the trapped girl, an enormous wave of water spews out of the train and sends her floating away. The rest of the video is the girl trying to reach the train, which is now moving with the second girl still inside it.

Finally, the girl is able to escape the train and the white cat pushes the first girl so she flies through the air to meet her. The two girls then walk off together as the video ends. 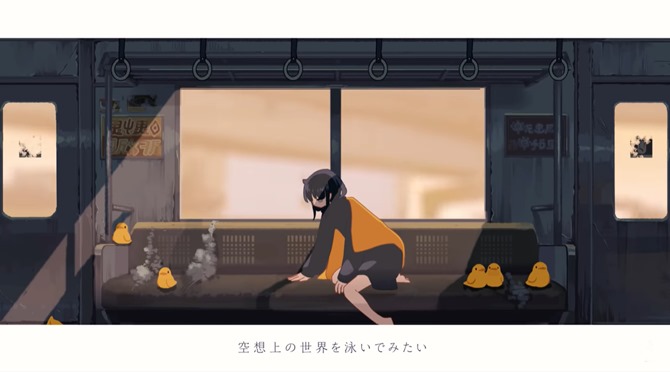 Eve’s’ Shinkai‘ is a song with a fabulous vibe, a gorgeous melody, and an addictive chorus. His vocals are beautiful. It is one of those songs that, the minute you hear it, you have an immediate urge to hear it again. And again. And again.

As the theme song for Josee, the Tiger and the Fish, ‘Shinkai‘ is a perfect choice as it beautifully embodies the melancholic feel of that film — the story of Tsuneo and Josee, the disabled girl he meets and falls in love with, although he quickly and sadly realizes there will never be a future for them.

Listen to Eve’s ‘Shinkai’ and watch the music video below, and try not to stop every frame to stare at that luscious art.

You can learn more about animator Mari Yasu on her website.