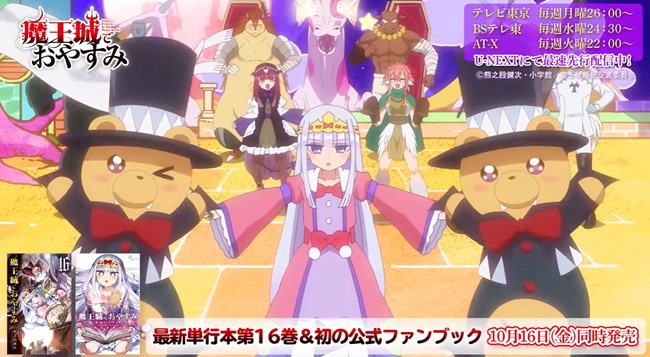 With it only currently airing in Japan and via Funimation in the United States, I have not yet been able to watch the new comedy fantasy anime series Sleepy Princess in the Demon Castle.

That has not stopped me from falling in love with the anime’s opening animation, however, or its opening theme song — ‘Kaimin! Anmin! Syalist Seikatsu’ sung by Inori Minase (Princess Syalis herself) — or from playing them both over and over again.

In fact, the Sleepy Princess in the Demon Castle opening animation may just be one of the cutest I have seen in a while. (The artwork is gorgeous too!)

What with it showing Princess Syalis dancing around the castle with various quirky characters, trying to fall asleep while sandwiched by two teddy bear guards, and all the while desperately wanting to get a decent night’s sleep.

The Sleepy Princess in the Demon Castle opening theme song ‘Kaimin! Anmin! Syalist Seikatsu’ (“Sleep! A Good Night’s Sleep! Syalist Life”) sung by Inori Minase is also a winner — as it is upbeat and fun, has a catchy melody and chorus and, of course, Inori’s adorable vocals.

In other words, I am already in love with Princess Syalis and I have yet to see more than a couple of minutes of her singing. (Article continued below…)

Sleepy Princess in the Demon Castle is animated by Doga Kobo (Diary of our Days at the Breakwater), directed by Mitsue Yamazaki (How heavy are the dumbbells you lift?), has Yoshiko Nakamura (Monthly Girls’ Nozaki-kun) handling series composition and Ai Kikuchi (New Game!) as character designer.

According to VIZ Media, the storyline of Sleepy Princess in the Demon Castle, goes like this:

Sshhh! Princess Syalis is trying to get a good night’s sleep. Some shut-eye. Forty winks. Catch some Z’s. Long ago in olden times when people and demons lived together in—well, disharmony, really—a demon king kidnaps a human princess and imprisons her in his castle. Bereft, the princess’s subjects beat their chests in anguish…until a hero arises to spearhead Project Rescue Our Princess!

While waiting for her knight in shining armor, what’s an imprisoned princess to do…? Teddy-bear guards with bat wings are all very well, but her dungeon cell is bo-o-o-ring! So, she decides to wile away the long hours by sleeping. Now if only she could get comfortable…and didn’t suffer from insomnia…