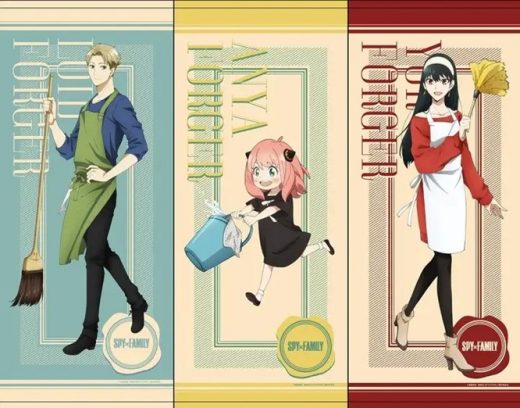 The SPY x FAMILY anime series is only three months away from its premiere, but the cute key visuals promoting the show keep on coming.

This week’s SPY x FAMILY key visual has all three members of the Forger family going domestic and cleaning their home.


Loid, complete with cute apron, is sweeping, ‘daughter’ Anya is carrying a bucket of water and might be heading off to clean the windows, while Loid’s ‘wife’ Yor has a big, yellow feather duster.

Because let’s face it, while being a spy, a mind-reader and an assassin are vitally important to governmental work, nobody wants to live in a filthy house, eh?

The SPY x FAMILY anime series will premiere in April, 2022.

The anime is being directed by Kazuhiro Furuhashi (Mobile Suit Gundam Unicorn), with Kazuaki Shimada (The Promised Neverland) designing the characters.

It will stream on Crunchyroll outside Japan.

With Tatsuya Endo’s SPY x FAMILY manga being one of the most popular series in recent years, its animation adaptation is expected to be a huge success.

When you look at the cool artwork and the trailers that have been released so far, I would say that is pretty much a given.