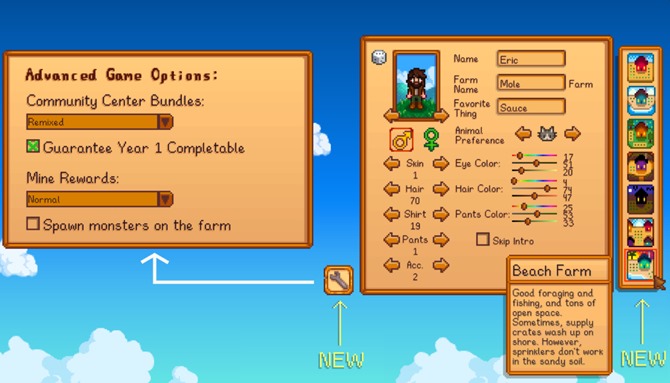 According to Concerned Ape’s Twitter account just a few days ago as well, the Stardew Valley Update 1.5 is in its absolute last stages and “it might come out this year on PC, and then on console early next year”.

It might come out this year on PC, and then on console early next year

In today’s tweet, Concerned Ape also showed off a screenshot of some of the hit game’s new Advanced Game Options.

They include the ability to choose a Stardew Valley Beach Farm when you are first setting up your game, as well as the ability to modify Community Center bundles and Mine Rewards.

You will even be able to decide to allow the game to spawn monsters on your farm.

Throw in the enormous amount of new content in Update 1.5 Barone hinted at last month, as well as a major new end-game piece of content, and the Stardew Valley Update 1.5 may just be one of the best things of this year. (Then again, with the hell 2020 has been, that’s probably not that difficult).

If you're a seasoned player thinking of starting a new farm when 1.5 comes out, I'd like to highlight a couple of new features. There will be a new farm type, "Beach Farm", and a new "Advanced Game Options" menu, from which you can adjust some aspects of the game: pic.twitter.com/iMnw2uGLEO

Do note, however, while being able to build a Beach Farm in Stardew Valley sounds like a lot of fun, it will have one drawback.

Because, while supply crates may sometimes wash ashore, the sandy soil will not allow sprinklers to work, so you could find yourself doing a helluva lot of watering.

We’ll keep you posted of any appearance of the Stardew Valley Update 1.5 before the end of the year but, fingers crossed, it still might arrive in time for Christmas.

She has been playing the game since July with Yogscast Duncan, and they don’t seem to be tired of it yet.