During the few times I find a slice of life anime that stands head and shoulders above the rest, you can guarantee I tell everyone.

Such is the case of the currently airing Super Cub anime.

A slice of life series that, if it hadn’t been done so well, could have ended up being a very pretty Honda commercial and not much else.


After all, protagonist Koguma buys a used Honda Super Cub, gets the oil changed with Honda’s Ultra G1 4 Cycle engine oil (10W-30) and, of course, is told to use that oil by the garage owner who sold her the bike.

There are then shots of her Super Cub emblem from just about every conceivable angle, as Koguma learns how to do an oil change, is given a carrier for her bike, lovingly polishes the machine and then rides it all over the small Japanese town she lives in.

It is also subconsciously drummed into your head that riding a Super Cub is safe and convenient as we see Koguma go grocery shopping and take a job at her high school as a document courier.

In other words, if you didn’t want a Honda Super Cub before you begin watching the Super Cub anime, you will by the time you have finished it.

New friend Reiko also owns a Honda Super Cub, and many of the scenes she is featured in are her raving about her bike and what a wonderful choice it is for anyone.

That being said though, the obvious Honda collaboration with the Super Cub anime series is not remotely a detriment.

In fact, due to the anime being able to legally use the name, and with its animators allowed to create gorgeous artwork of the motorbike’s incredibly cool design, this superb anime series has an air of authenticity many others do not. 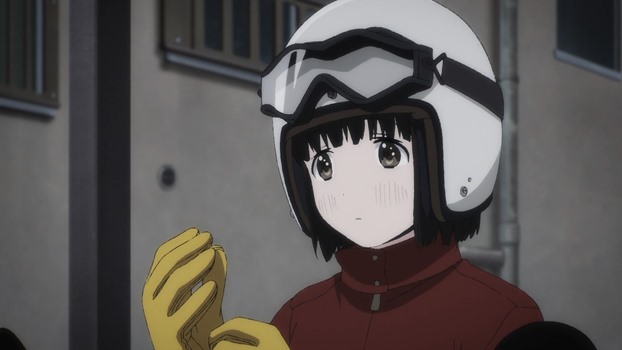 The part of protagonist Koguma is beautifully acted by Yuki Yomichi — a newcomer to the world of Japanese voice acting, but one who is likely to become a big star as her characterization of Koguma is wonderfully done.

Just in the quiet and abrupt way she speaks, and how she thinks oh so carefully before answering any questions, it fabulously illustrates what it must be like to be so young, unsure and with nobody except yourself to take care of you.

The Super Cub anime is also nicely done in how it shows Koguma’s gradual development from a gloomy loner whom everyone ignores to someone who becomes extremely capable as she learns how to take care of her motorbike, and thus herself, and to then venture further and further afield on it.

This all adds up to make Koguma one of the most memorable slice of life characters in recent years, as everything about her from the very first second she appears in frame feels real. 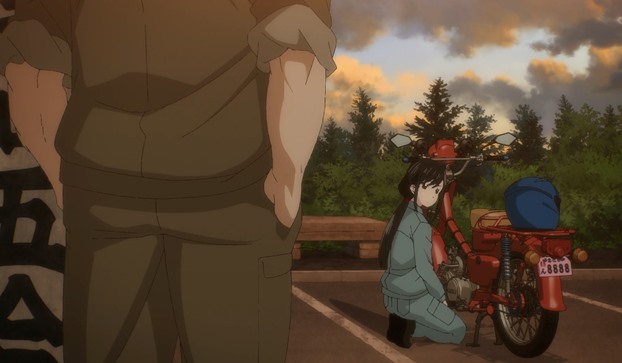 In stark comparison to Koguma, we have Reiko. An independent high school student who decided to live alone as she couldn’t stand the restrictions and barriers being placed upon her by others.

Reiko wants to climb Mount Fuji. Not like most other people do by foot, however, but instead on her Honda Super Cub. A motorbike she believes can do anything.

Discovering the Super Cub she owns isn’t powerful enough to make that climb, Reiko buys new parts for the bike and installs them herself so she can make a better attempt.

She helps Koguma modify her own Super Cub so the motorbike is more powerful than the factory-assembled original.

But she is also smart enough to know it is important to allow Koguma to work out some of the smaller things about owning a Super Cub and its necessary riding equipment herself.

Because, as Koguma’s world expands, she begins to take little daily steps to grow right along with it. Doing things for herself is part of that.

Reiko is also just as good of a spokeswoman for the Honda Super Cub as Koguma. But, where Koguma is effective at proving to novice riders a Super Cub would be a good choice, Reiko is a more experienced rider and so shows what the bike can really do. 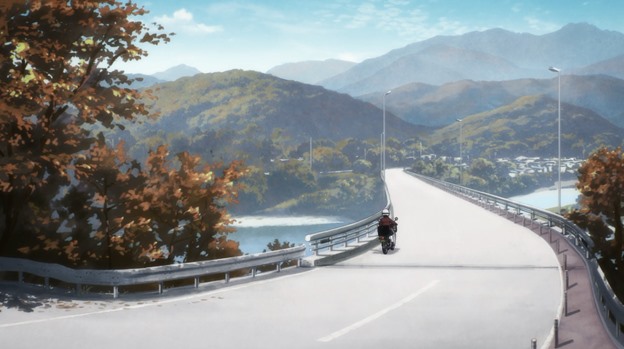 Where the Super Cub anime also stands out as a superb slice of life is in its beautiful watercolor-style backgrounds, and its use of classical piano music.

Both give the anime a feeling of ‘everything is alright with the world’, while illustrating just how beautiful the Japanese countryside is and how peaceful it must be to live there.

The sound in Super Cub is also first-rate with the sounds of the motorbike, especially on quiet roads, contrasting markedly with the busy corridor and classroom noises of Koguma’s school.

Both draw you into the anime, and magnify the feeling you are right there living their day alongside Koguma and Reiko. (continue reading below…)

All in all then while, yes, the Super Cub series spends much of its time selling the Honda Super Cub motorbike to anyone that might be interested in owning one, the characters are delightful, the art style and music are perfect, and the whole cozy, relaxed and laid-back feel of this currently airing slice of life anime is so damned sweet.

The wonderfully calming Super Cub anime is currently streaming on Funimation, with the seventh out of 12 episodes just released this week.

And, of course, if you want to buy a Honda Super Cub motorbike, there are many online sellers offering them.