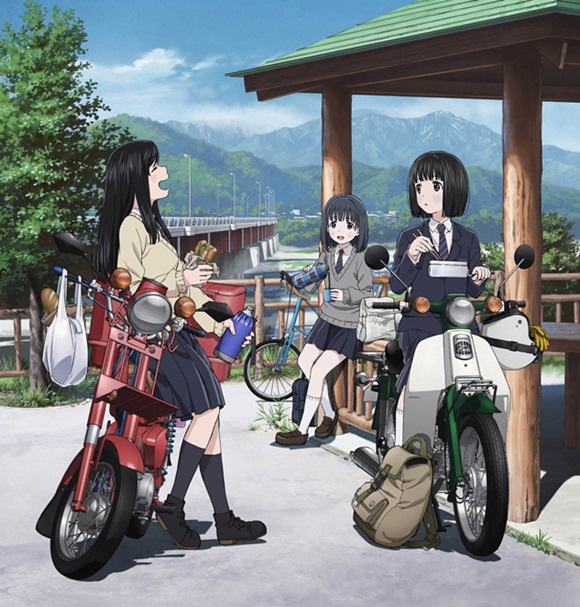 According to Anime News Network, the recently premiered Super Cub anime series will have 12 episodes, and will also be getting a Blu-ray release in Japan in August.

The Super Cub anime is based on the best-selling novels of the same name by Tone Koken.

The series was directed by Toshiro Fujii (Boruto: Naruto Next Generations), with Toshizo Nemoto (Last Hope) in charge of scripts and Toru Imanishi (WorldEnd) as character designer.

The series stars Yuki Yomichi (Megami-ryō no Ryōbo-kun) as Koguma, Ayaka Nanase (Sakura Quest) as Reiko and Natsumi Hioka (High School Prodigies Have It Easy Even In Another World) as Shii.

As per Anime News Network, the plot for the motorbike anime series goes like this:

Koguma is a high school girl in Yamanashi. She has no parents, friends, or hobbies, and her daily life is empty. One day, Koguma gets a used Honda Super Cub motorcycle. This is her first time going to school on a motorcycle. Running out of gas and hitting detours become a small source of adventure in Koguma’s life.

She is satisfied with this strange transformation, but her classmate Reiko ends up talking to her about how she also goes to school by motorcycle. One Super Cub begins to open up a lonely girl’s world, introducing her to a new everyday life and friendship.

Super Cub premiered on Funimation on April 7th, and will end some time in June. If you haven’t watched the first three episodes yet, but love cute girls doing cute things, the series is well worth a watch.