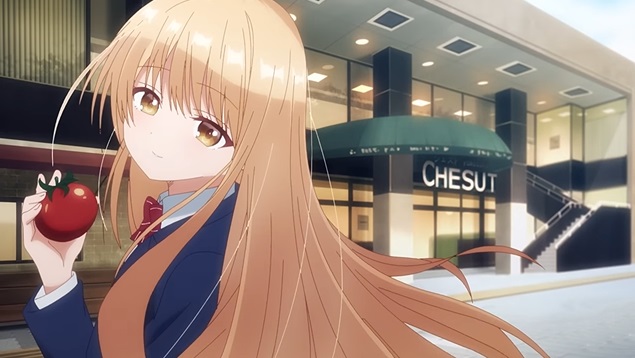 When it comes to utter cuteness, it would be difficult to beat that of The Angel Next Door Spoils Me Rotten‘s Mahiru.

Something animation studio Project No. 9 is well aware of, as they have just released The Angel Next Door Spoils Me Rotten’s creditless opening animation video that is absolutely adorable.


Not only because of beautiful girl-next-door Mahiru, but also because protagonist Amane is so obviously besotted with her as he wouldn’t be so awkward around her if she wasn’t.

The Angel Next Door Spoils Me Rotten creditless opening animation video also features the anime’s sweet opening theme song — ‘Gift’ by Masayoshi Oishi — a song that grabs you the minute it starts, as it is just so upbeat and fun.

Episode 1 of The Angel Next Door Spoils Me Rotten aired in Japan earlier today, and Crunchyroll is already streaming it in most territories.

The anime is being directed by Li Hua Wang in his directorial debut, with Kenichi Imaizumi (Kingdom) supervising.

Keiichirou Oochi (The Quintessential Quintuplets) is in charge of series composition, with Takayuki Noguchi (Higehiro) responsible for character designs based on original designs by light novel illustrator Hanekoto.

The anime itself is based on the light novel series of the same name (akaお隣の天使様にいつの間にか駄目人間にされていた件, Otonari no Tenshi-sama ni Itsu no Ma ni ka Dame Ningen ni Sareteita Ken in Japan), which was written by Saekisan.

Yen Press is publishing the novels in English, with four volumes currently out and Volume 5 due next month.

The novels tell the story of Amane, a high school student who doesn’t pay much attention to Mahiru, the most beautiful girl in his class. Not until he notices her in a park in the rain one day, and gives her his umbrella.

Mahiru then decides she should repay him and, as Amane lives alone (next door to her), she decides to help him out around the house. Thus begins the couple’s odd relationship.

A relationship they keep hidden from their classmates at school.

Watch the just-released The Angel Next Door Spoils Me Rotten creditless opening animation. Now doesn’t that make you want to rush out and watch the anime?

RELATED: The Angel Next Door Spoils Me Rotten‘s Mahiru is celebrating her birthday with the cutest visual…