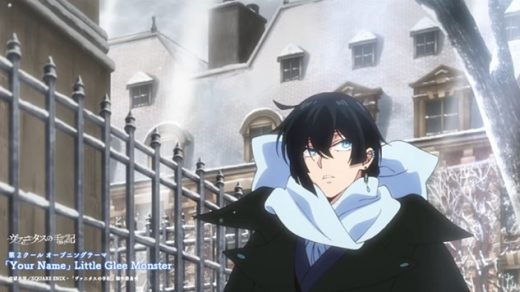 I’ll say it up front, and we are only in the second week of 2022, but second The Case Study of Vanitas‘ opening theme song ‘Your Name‘ by Little Glee Monster is one of the best of the year.

Yes, it really is.

Because not only is Little Glee Monster’s ‘Your Name’ pretty, the first minute or so of the music and vocals gives off a feeling of suspense, slight eroticism and creepiness — which is perfect for this show — followed by several fast notes from the most French of instruments — the accordion — then placing the listener slap bang in the relevant country.

The song then morphs into a track with a heavy dance beat and even richer vocals, just to grab your attention even more.

No surprise, though, as so far at least The Case Study of Vanitas did not disappoint in its choice of music throughout Season 1, and now going into the second season it appears we can expect more of the same.

Listen to The Case Study of Vanitas‘ OP ‘Your Name‘ by Little Glee Monster in the anime’s opening animation down below, which of course features just about every one of your favorite characters.

The Case Study of Vanitas second cour kicks off today on Crunchyroll with Episode 13, where it is currently one of the streaming platforms highest-rated shows.

Now keep your fingers crossed we will get the full release of Little Glee Monster’s ‘Your Name‘ soon as, man, this thing is addictive.

The all-female member Japanese pop group should be proud.