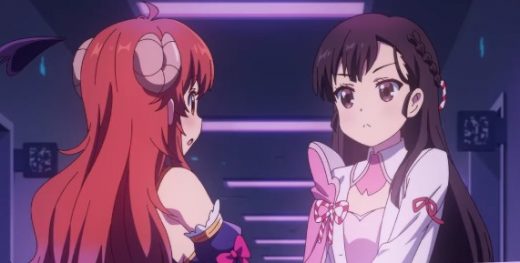 Another The Demon Girl Next Door Season 2 key visual has been released today. This one is an updated version of a previously released visual but, in my opinion, is even cuter.

Along with the new visual, we were also given a new character PV for Sakura Chiyoda — a teacher, and also the older sister and person who raised Momo Chiyoda.

The Demon Girl Next Door Season 2 continues the anime adaptation of the manga series by Izumi Ito.

Our favorite supernatural powerhouse, Shamiko, AKA Shadow Mistress Yuko, aims to break the curse placed on her family by the Clan of Light. Along the way, she forms an unlikely allegiance with Momo, a rival from the Light Clan!

They’ll need to work together to find another magical girl who’s gone mysteriously missing, and what this?

There’s a dangerous force lurking somewhere in the city, plus Shamiko’s mysterious father might be closer than she thinks? Looks like Shamiko and Momo will have their hands full.

The Demon Girl Next Door Season 2 is currently streaming exclusively on HIDIVE.