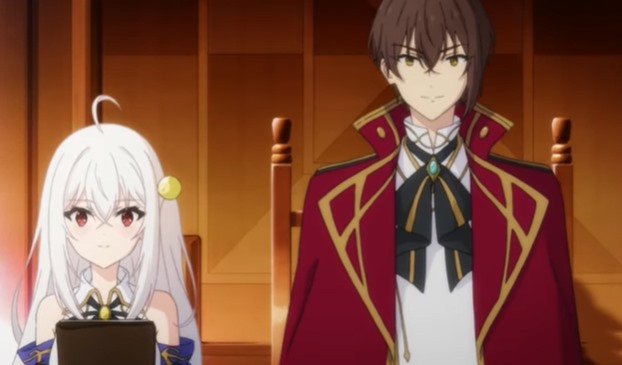 The Genius Prince’s Guide to Raising a Nation Out of Debt anime series just got a cute key visual that perfectly illustrates the craziness of the upcoming show.

In it, Prince Wein merrily throws documents around as close friend and aide Ninym looks on in shock.

Along with the visual, a new PV was also revealed giving us more of a glimpse into Prince Wein’s mind, and the lengths he will go to not to have to rule the kingdom as he should.

The Genius Prince’s Guide to Raising a Nation Out of Debt anime is based on the light novel series written by Toru Toba and illustrated by Falmaro. (Continue reading article after new key visual…)

In the west, the English language version of the series is published by Yen Press, with seven volumes out currently.

They describe the plot of The Genius Prince’s Guide…. as follows:

It ain’t easy being a genius…

Prince Wein is ready to commit treason. And who can blame him? Faced with the impossible task of ruling his pathetic little kingdom, this poor guy just can’t catch a break! But with his brilliant idea of auctioning off his country, this lazy prince should be able to retire once and for all. Or that was the plan…until his treasonous schemes lead to disastrous consequences-namely, accidental victories and the favor of his people!

The Genius Prince’s Guide to Raising a Nation Out of Debt is being directed by Makoto Tamagawa, with Deko Akao (Noragami) in charge of scripts, while Rie Takahashi (Yuru Camp, KonoSuba) is voicing Ninym, and Souma Saitou (Moriarty the Patriot, Infinite Dendogram) is playing Prince Wien.

Watch the new The Genius Prince’s Guide PV below, and you’ll quickly understand just how Prince Wien thinks and how frustrated he is with his role in life.