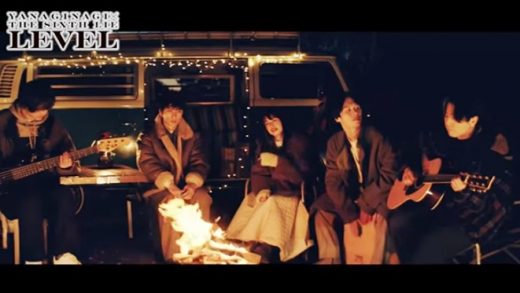 The song is called ‘LEVEL‘, and is also The Genius Prince’s Guide to Raising a Nation Out of Debt opening theme song.

‘LEVEL‘ was recorded by Nagi Yanagi in collaboration with electro pop group The Sixth Lie.

The ‘LEVEL’ music video has Yanagi out in the countryside far from anywhere, waiting for a ride from the boys in The Sixth Lie.

When they eventually show up in a classic VW bus, they drive off together and then stop to get something to eat while the video intersperses cuts of the band and of Yanagi performing the song.

It ends with all of them sitting around a campfire at night, against the backdrop of the bus, performing the song together, then the day after dropping Yanagi off where they picked her up and driving away.

The lyrics for ‘LEVEL‘ by Nagi Yanagi and The Sixth Lie were written by Yanagi herself. The music was composed and arranged by The Sixth Lie guitarist Reiji.

That the track is now The Genius Prince’s Guide to Raising a Nation Out of Debt opening theme song isn’t surprising either, as its upbeat, can-do-anything feel resonates perfectly with the anime.

‘LEVEL‘ by Nagi Yanagi and The Sixth Lie came out on January 13th digitally.

The CD version of the song (see cover above) will hit stores on February 9th.

As for The Genius Prince’s Guide to Raising a Nation Out of Debt, the well-received anime is based on the light novels by Toru Toba and Falmaro.

Yen Press, who publishes the light novel series, describes the story this way:

The prince of this small and weak kingdom strives for only one thing: selling out his country and living a quiet life in leisure! Sadly, the greatest obstacle he will ever face is his own genius…! As he achieves ever greater accomplishments, he earns more and more favor with the people of his kingdom…which makes fulfilling his own dreams all the harder!!!

Watch the anime on Funimation.