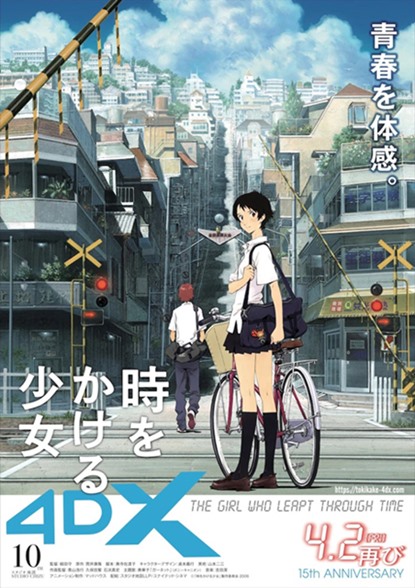 One of the best Japanese anime films of the 21st century — The Girl Who Leapt Through Time — is being re-released in movie theaters in Japan in April. This time in a 4DX version.

If you’re not sure what The Girl Who Leapt Through Time 4DX movie would look like, just know a 4DX movie is one of those where the seats move along with various scenes in the movie, you might get water shot at you and there are even specific smells that are released as the film progresses.


Not my kind of thing, especially for a classic anime film like The Girl Who Leapt Through Time — a film with a lot of movement itself, by the way — but, if you enjoy something out of the ordinary, you may enjoy this.

The 4DX version is being released to celebrate the 15th anniversary of the film, and the 10th anniversary of Studio Chizu, the studio director Mamoru Hosoda set up so he could have more control over the work he produced.

A new The Girl Who Leapt Through Time trailer was released today, along with a poster for the upcoming 4DX movie. Check them out above and below.

The award-winning film, which originally hit movie theaters in 2006, will release in select Japanese theaters on April 2nd, 2021.