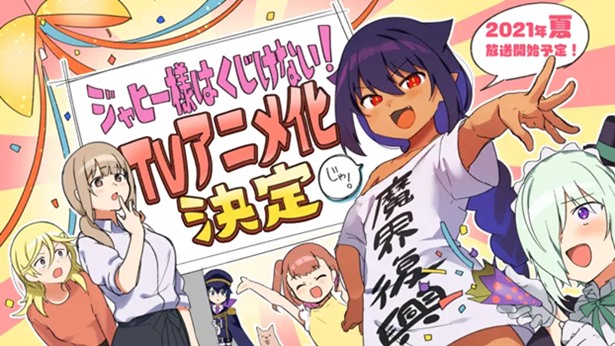 The upcoming comedy slice-of-life anime The Great Jahy Will Not Be Defeated! got a cute new key visual via Twitter today, along with main cast and staff announcements. The premiere date for the series was also revealed.

The Great Jahy Will Not Be Defeated! (aka Jahy-sama wa Kujikenai! in Japan) is based on the comedy manga by Wakame Konbu, and tells the story of Jahy-sama, a once powerful demon lord, who ends up living in a rundown apartment in the modern world after her fantasy realm is destroyed by a magical girl.


As she struggles to clean her scruffy apartment and pay rent, she plots her way back to her former life of immense power.

The series is being directed by Mirai Minato (Bofuri: I Don’t Want to Get Hurt, so I’ll Max Out My Defense), with series composition by Michiko Yokote (Ao-chan Can’t Study), and character design and chief animation direction by Saori Nakashiki (Animation Director of Dropout Idol Fruit Tart).

Animation is by SILVER LINK (The Dungeon of Black Company, Non Non Biyori).

The main cast was also announced today, and they include Naomi Ohzora (Uzaki-chan Wants to Hang Out!) as protagonist Jahy-sama, Ai Kayano (Smile Down the Runway) who plays Tenchou, Yōko Hikasa (K-on!) as Ōya, Kana Hanazawa (Angel Beats!) who voices Druj, Mikako Komatsu (Dr. Stone) as Salwa, Sumire Uesaka (Show by Rock!!) who is playing the Magical Girl, and Yui Ogura (Goblin Slayer) as Kokoro.

The Great Jahy Will Not Be Defeated! will air in Japan beginning July 31st. And yep, this one looks like a helluva lot of fun!