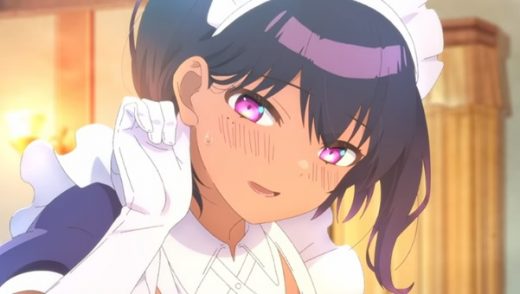 If you are a fan of The Great Jahy Will Not Be Defeated! anime series (like me!), there is a decent chance you will also enjoy the upcoming new anime The Maid I Hired Recently Is Mysterious. After all, the anime is based on a manga from the same mangaka Wakame Konbu.

Yep, unlike some anime that are announced but then don’t show up forever, The Maid I Hired Recently Is Mysterious has obviously been in production for a while now.

Along with the anime announcement, Square Enix also released a The Maid I Hired Recently Is Mysterious promotional video (watch below), a cute first key visual, and the mention that two heavy hitters have been cast in the main roles.

Silver Link and Blade are in charge of anime production.

Yen Press is publishing the English version of The Maid I Hired Recently Is Mysterious manga, with the third in the series out in June, and the fourth in October.

There’s something really strange about the maid I just hired! No normal person could be so beautiful, or cook such amazingly delicious food, or know exactly what I want before I even ask. She must be using magic—right, a spell is the only thing that can explain why my chest feels so tight whenever I look at her.

I swear, I’m going to get to the bottom of what makes this maid so…mysterious!

Watch The Maid I Hired Recently Is Mysterious promotional video below to get an idea of what we have to look forward to. Lilith is adorable, eh?