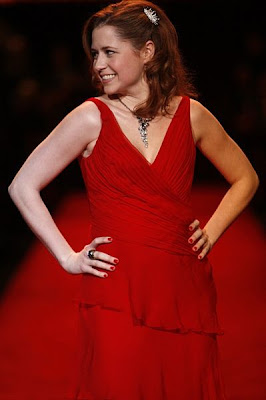 In what guests have described as a “beautiful wedding”, The Office’s Jenna Fischer married screenwriter Lee Kirk on July 3rd in Malibu, California.

The couple is said to be very much in love and have been together for more than two years. It’s often a good precursor of a successful and long-lived marriage if an actor in Hollywood doesn’t marry another actor. Kirk Lee being a screenwriter, he’ll definitely have an understanding of the pressures of Hollywood without having the jealousies that often come with being another actor.

Plus, at 36 years old and after one failed marriage, Jenna Fischer obviously took her time getting married again to make sure she found the right one. Good for her!

Good luck to them. I hope they have a long and happy married life.