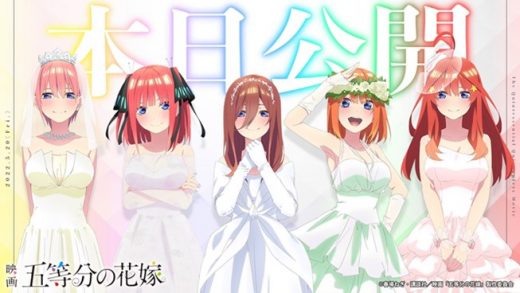 By the time you read this article, you may already know who Fuutarou marries in the The Quintessential Quintuplets Movie.

After all, the rom-com anime movie premieres in movie theaters in Japan tomorrow, May 20th, and someone will likely leak the name of the lucky Nakano girl who becomes his bride the minute they leave the theater. (Well that, or you have already read the manga).


But, if you still want to be surprised when The Quintessential Quintuplets Movie hits your shores, the official Twitter account for the anime has released a very cute new visual showing all five Nakano girls wearing a wedding dress.

Just so you can get your favorite waifu fix until that happens.

In other words, it still seems Miku, Nino, Yotsuba, Itsuki and Ichika have the same chance of being the woman Fuutarou loves for the rest of his life.

The Quintessential Quintuplets Movie is directed by Masato Jinbo (Restaurant to Another World), with the script by Keiichirou Oochi (Hinamatsuri), and anime production by Bilbury Animation Studios.

The film is based on the manga by Negi Haruba, and follows on from The Quintessential Quintuplets Season 2 (aka 5-toubun no Hanayome ∬).

It tells the story of part-time tutor Uesugi Fuutarou’s relationship with the Nakano quintuplets — girls whom he is hired to tutor after they all do terribly in school — as well as his eventual marriage to one of them.

Enjoy the just released The Quintessential Quintuplets Movie visual of the Nakano quintuplets in their wedding dresses, and check out what you can expect in the film in its official trailer.