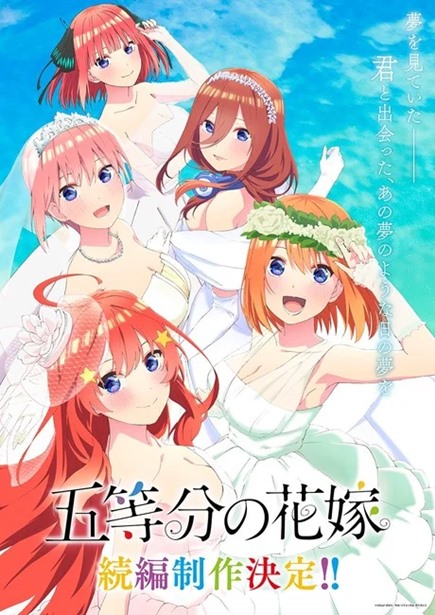 Yep, that’s correct, the story of Futaro Uesugi and the Nakano girls will carry on in a movie called Eiga Gotōbun no Hanayome (aka The Quintessential Quintuplets The Movie), which will release in Japan next year.


Along with the movie’s reveal this weekend,  a gorgeous The Quintessentials Quintuplets The Movie key visual was also shared, showing all the Nakano girls dressed in white ready for Futaro’s marriage to ‘the bride’.

Information has not been shared about the director of the film or the returning cast but, with the anime series being so ridiculously successful, both are highly likely to remain the same.

Check out the extremely cute The Quintessentials Quintuplet The Movie key visual above, and watch the previously released PV trailer below.

Millions of fans around the world must be thrilled about now that they may just finally see who Futaro marries (although, expect it to be right at the end of the movie before the actual ‘reveal’).

Watch, or re-watch, both seasons of the romantic comedy on Crunchyroll.