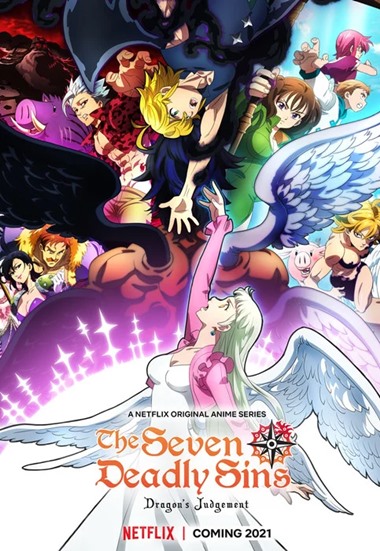 The Seven Deadly Sins: Dragon’s Judgement anime finally got a release date, with a new English subtitled trailer for the upcoming anime series showing a 2021 release on Netflix.

The series, which is officially Season 4 but Season 5 on Netflix as they considered the TV special The Seven Deadly Sins: Signs of Holy War ‘Season 2’, will again be animated by Marvy Jack and Studio DEEN.


If rumors are correct, however, this season it will be Studio DEEN doing the bulk of the animation with Marvy Jack just collaborating.

Let’s hope so as, with different animators working on the project, we may just get a better looking series than we ended up with for Season 3.

Most of the staff from Season 3 (The Seven Deadly Sins: Imperial Wrath of the Gods) will be back for Season 4, including director Susumu Nishikawa.

Rie Nishino is animation character designer again, with Rintarou Ikeda in charge of scripts and Chikako Yokota as sound director. (article continues below…)

After all, with a description that tells you:

A battle against the fates of Eternal Life and Perpetual Reincarnation, the continuing 3,000 year journey of Meliodas and Elizabeth. Who is the true enemy? Who should be fought?

you just know this one will be exciting.

The series is based on the hit manga by Nakaba Suzuki.

The Seven Deadly Sins: Dragon’s Judgement premieres in Japan on January 6th on TV Tokyo. Netflix also released a new original visual along with the trailer today. One that is quite beautiful (see above).

You can currently watch all other seasons of the anime series on Netflix.