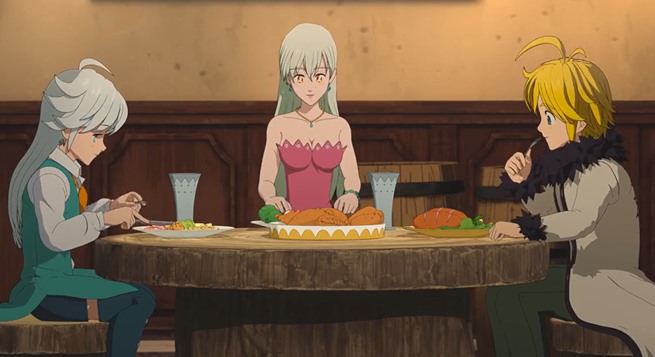 Let me begin this by saying I never drop an anime, as I presume there is something interesting I can get out of even the worst of them.

That is why, this year I have sat through all of EX-ARM (appalling), Vampire Holmes and Girls’ Frontline. And no, I didn’t find anything interesting in them, except that they cemented my resolve to never repeat watch any of them.


So, to say I lasted 34 minutes into The Seven Deadly Sins: Grudge of Edinburgh – Part 1 before I decided there were 5,000 things I would rather watch proves just how terrible this 52-minute anime ‘movie’ is, and how, if Marvy Jack or Alfred Imageworks name is on any other anime, I will be avoiding it as hard as I avoided the Covid-19 “vaccines”.

Something that, it seems, many of the My Anime List viewers agree with, as the movie currently has a 6.17 score on that site and is falling fast. And, honestly, with what an utterly charmless dumpster fire the anime is, I’d say that score is pretty generous.

The art style of The Seven Deadly Sins: Grudge of Edinburgh

Now, over a month ago, I had already pointed out the art style of The Seven Deadly Sins: Grudge of Edinburgh was so poorly drawn, if I didn’t know Elizabeth was supposed to be Elizabeth, I wouldn’t have guessed what anime character she was if I had been given three hangman letters for her name.

Including the letter E.

But, although I worried about how terrible the characters looked in the trailer, I was still determined to give the full movie a chance. After all, every anime fan knows, what appears in a preview is not always how the final product turns out.

Sadly for The Seven Deadly Sins: Grudge of Edinburgh, the finished product is decidedly worse than even the trailer suggested.

Characters are so strangely created even Melodias looks like an empty cardboard cutout of himself, Elizabeth (especially her face) is frankly frightening, and even though Gowther looks similar to himself at first appearance, less than 30 seconds in, and the only way I can explain how blank and shallow he seems is there must be a body snatcher coming up in the plot somewhere. Right?

Otherwise, how can the least lavish of Seven Deadly Sins characters look so bloody bland, flat and dull?

As for the other characters, every one of them seems weirdly hollow. As if their personalities were sucked out by an alien invader, and all that is left is their shell.

Honestly, I almost cried when I saw how unlike themselves every single one of some of my favorite anime characters has become.

And don’t get me started on their eyes. Eyes that, instead of properly watching something happening on the screen, often seem to be looking slightly passed it.

As if each person in it is struggling with a squint.

The Seven Deadly Sins: Grudge of Edinburgh animation is abysmal

I don’t expect Chainsaw Man quality in every anime I watch as, let’s face it, that show is head and shoulders above most anime released when it comes to animation.

But Good Christ, what did Marvy Jack and Alfred Imageworks’ animators do to create something this damned wooden, with 3D CGI animation that is so badly done, I was yelling at my computer monitor less than five minutes in?

Sure, all Seven Deadly Sins fans bemoan how the series has become progressively worse since the first two gorgeously animated and drawn seasons, but even I didn’t think it could descend to this utter level of hell.

Yes, many fans have said the movie doesn’t look like an anime, it looks like a mobile game.

I wouldn’t even mind that, if it didn’t look like cut scenes from a game released a decade ago. Especially as, in some scenes, the frame rate is so low characters’ movements come off as jerky and strange.

Yes, there is superb CGI animation (although it will never be my first choice over a traditionally animated anime), but this isn’t it.

And a writer who should be kept far away from any further Seven Deadly Sins vehicles, as the cliché-ridden, stilted dialogued, seen/heard-that-before scenario-filled script was hard to stomach.

Especially when it came to scenes like Elizabeth collapsing and Tristan attempting to run to her side, but falling ass over tit as he attempts to get out of bed.

Then, when he finally arrives, he finds Melodias at her bedside melodramatically clutching an unconscious Elizabeth’s hand while begging “Stay with me”.

Sure, I can overlook poor writing if the animation, art style and action pull me in.

Pair abysmal writing with amateur grade animation art and action though, and The Seven Deadly Sins: Grudge of Edinburgh quickly became a ‘dropped’ anime for me, with almost 20 minutes still left in it.

The Seven Deadly Sins: Grudge of Edinburgh is one of two so-called ‘movies’ Netflix is releasing in the franchise and, according to several other commentators, this first one ends on a ridiculous cliff-hanger before the plot has even really begun.

I lost interest before I could even get that far as I was beginning to worry about losing the will to live. So, no, I won’t be watching Part 2.

Watch the trailer for the now-streaming film at your peril. Check out the film (although I don’t recommend it) via Netflix.

NOTE: And, honestly, I absolutely bloody HATE slamming any piece of art creators have produced as I always worry, if one of them reads what I write, it will contribute to destroying their enjoyment in what they do.

But to say I am disappointed with how The Seven Deadly Sins: Grudge of Edinburgh turned out in every aspect of its production (except the music on its soundtrack) is an understatement.

And then I think just maybe, if one of them reads this, they will try that little bit harder to make Part 2 not quite the travesty this one turned out to be.

After all, I would ALWAYS rather a creator turns out something I can go embarrassingly overboard about loving, rather than having to stop myself throwing something damaging at the screen as I am so bloody pissed.