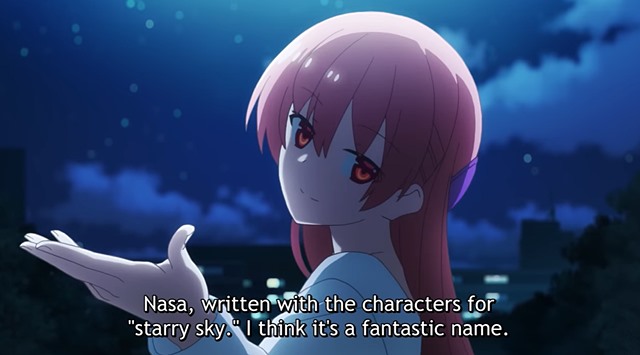 The TONIKAWA: Over The Moon For You English subbed trailer was released today. The comedy anime is based on Kenjiro Hata’s Fly Me to the Moon manga series and is a Crunchyroll Original series.

And I have to say, even before the English subbed trailer was released, TONIKAWA: Over The Moon For You was on my list of must watches in 2020.


Come on, the premise of the upcoming anime series is so cute and so unusual —

On the day Nasa takes his high school entrance exams he gets hit back a truck and is saved by a girl called Tsukasa. Falling in love with her on the spot he asks her out, but she tells him she will only go out with him if he marries her.

Several years later, Nasa gets an amazing gift on his 18th birthday. Tsukasa suddenly re-emerges in his life and hands marriage registration papers to him.

From that day forward, we get to witness the newlyweds and the situations they find themselves in.

In other words, not that much different than many arranged marriages around the world except, in this case, Tsukasa makes the arrangement herself.

One Room: Third Season trailer is as cute and slightly creepy as you might expect — watch

TONIKAWA: Over The Moon For You stars Akari Kito (Demon Slayer:Kimetsu no Yaiba) as Tsukasa, Junya Enoki (Cardfight!! Vanguard G) as Nasa, Yu Serizawa (How Clumsy You Are, Miss Ueno) as Kaname, Sumire Uesaka (Why The Hell Are You Here, Teacher?) as Aya and Konomi Kohara (Sword Art Online — Alicization) as Chitose.

Watch the extremely cute TONIKAWA: Over The Moon For You English subbed trailer below.

You can keep up-to-date on news on the anime’s official website, and watch the series on Crunchyroll beginning in early October.