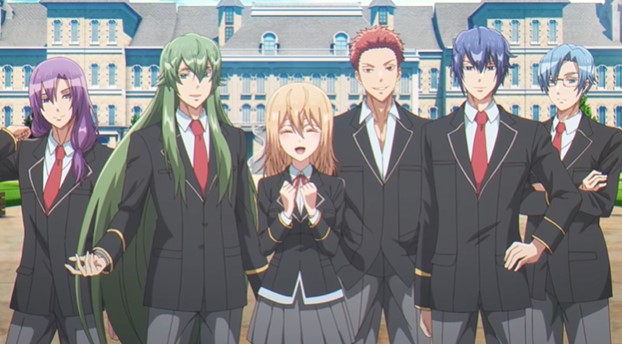 The light novel series Trapped in a Dating Sim: The World of Otome Games is Tough for Mobs by Yomu Mishima has just gotten a new anime series.

An official website for the anime has also been launched, and kicked off with a teaser visual and the first Trapped in a Dating Sim: The World of Otome Games is Tough for Mobs promotional video. (Watch down below).

The English-language Trapped in a Dating Sim: The World of Otome Games is Tough for Mobs light novels(known as Otome Game Sekai wa Mob ni Kibishii Sekai Desu in Japan) are published by Seven Seas, who has this to say about the story:

Office worker Leon is reincarnated into a dating sim video game, where women reign supreme and only beautiful men have a seat at the table. But Leon has a secret weapon: he remembers everything from his past life, which includes a complete playthrough of the very game in which he is now trapped. Can Leon spark a revolution to change this new world order?

The three main cast members for the upcoming Trapped in a Dating Sim anime have also been announced.

They are Takeo Ōtsuka (Run with the Wind) as Leon, Kana Ichinose (Higehiro) as Olivia, and Fairouz Ai (Full Dive) as Angelica Ralpha Redgrave.

Trapped in a Dating Sim: The World of Otome Games is Tough for Mobs is being directed byKazuya Miura (Uzaki-chan Wants to Hang Out!), and Shin’ichi Fukumoto (Asst. Director The Detective is Already Dead).

Kenta Ihara (Saga of Tanya the Evil) is in charge of series scripts, with Masahiko Suzuki (Vivy -Fluorite Eye’s Song-) as character designer.

ENGI is in charge of animation.

Watch the just-released Trapped in a Dating Sim promotional video, and see Leon’s introduction to this strange new life. A life in which he might have a big advantage, if he can only figure out how to make that happen.