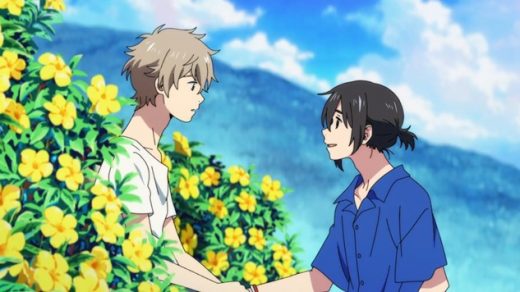 While I wanted to love the Boys’ Love movie Umibe no Étranger (aka The Stranger by the Shore) with its gorgeous art style, sweet and funny characters and idyllic setting, the whole thing left me dead inside.

So much so, only 31 minutes into the almost one-hour long film, and I was considering fast forwarding just to get it done.

Why did Umibe no Étranger leave me with such a feeling of disappointment, and a nostalgia for what could have been?

Because, Ye Gods, the Blue Lynx produced, Studio Hibari animated film had the potential to be so incredibly spectacular, yet let me down in almost every way. 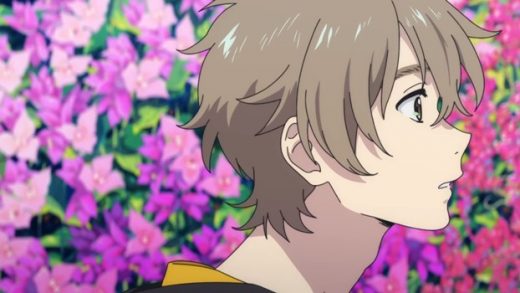 What is Umibe no Étranger?

The Umibe no Étranger anime film is based on the Boys’ Love manga written and illustrated by Kanna Kii.

It tells the story of Shun, a gay novelist who becomes estranged from his family after he comes out, so moves to Okinawa to live in a guest house.

There he meets Mio, an orphaned high school boy who is seven years younger.

In the few days they spend together, Shun realizes he is in love with Mio, but then the boy has to move to the mainland to live in an orphanage.

Three years later, Mio returns and professes his love for Shun, only to be rejected.

After all, if Shun had not been attracted to Mio in the first place, maybe Mio would have been able to settle down and have a happy ‘normal life’? 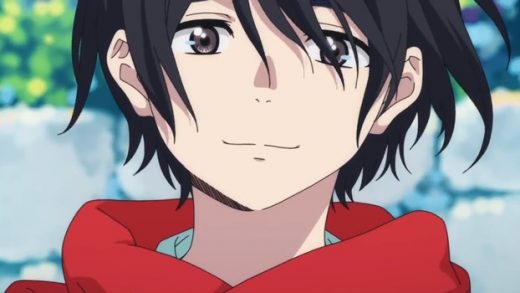 Umibe no Étranger anime film review — why does it fail so badly?

I have loved everything the Boys’ Love-focused anime label Blue Lynx has put out so far.

Anime like Given and Twittering Birds Never Fly: The Clouds Gather have been superb in every respect.

That’s why I expected the same level of rich emotional complexity, beautifully fleshed out characters and an interesting, satisfying story to be featured in Umibe no Étranger as well.

Unfortunately, that wasn’t the case.

Instead, anime production studio Studio Hibari crammed this quite detailed and interesting story into a short 58-minute film that misses just about all of the major points of the manga. 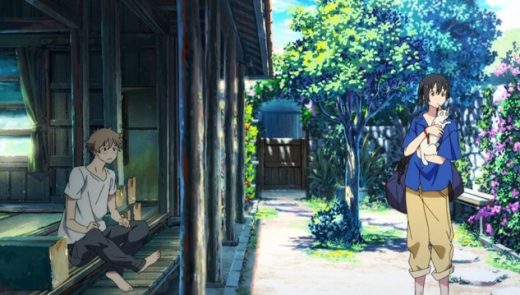 A film that introduces us to both Shun and Mio and the people around them in just the first 12 minutes, during which time we are supposed to believe Shun and Mio fall in love.

In the 3 minutes they actually spend together, that is.

Related: Umibe no Étranger in English dub coming to Funimation

Then Mio announces he has to move, and leaves. Then he comes back. Three years later — and within another minute and a half of the film’s progression.

No time to get to know or to develop these characters, who end up shallow, dull and instantly forgettable because of it.

No time to enjoy them being in love. No time to even really get a handle on the love story before it’s veering off in another direction. 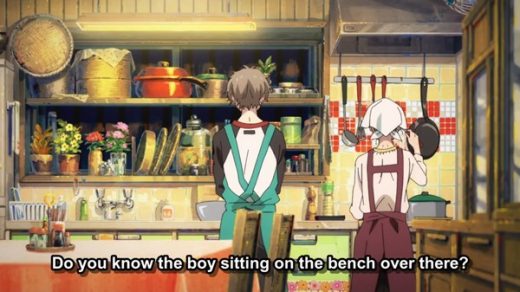 All of it is so rushed and so ridiculously unbelievable, if it wasn’t for the utterly gorgeous art style and beautiful animation, I would have dumped Umibe no Étranger at about minute 18.

That, however, is what saves this disappointing anime from being a huge waste of an hour for anyone who loved the Umibe no Étranger manga — every frame in this stunningly beautiful film being worth pausing it for. Then quickly taking a screenshot to be framed.

If it wasn’t for that, and for the pretty soundtrack, Umibe no Étranger would have left me utterly and absolutely cold. 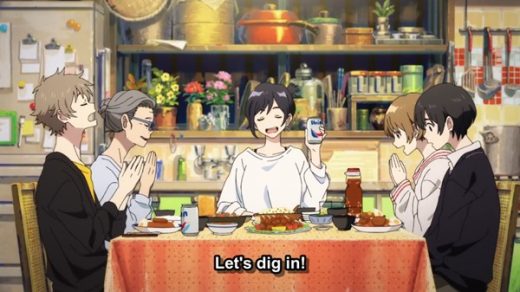 A film without any emotional depth, with characters that aren’t developed beyond the basic sense of what it means to be a human being, and with a plot that is over before it has even begun.

A film that, an hour after I had watched it, my only memory was of bright flowers lazily swaying in the breeze, sunsets over a gentle ocean, and the wonderfulness of what must be Okinawa.

With the obvious immense talent of the staff at Studio Hibari in both design and animation, it is such a damned shame that this was all that was turned out.

Umibe no Étranger is worth your time if you just want to spend an hour staring at beautiful pictures.

If you are looking for anything more, though, including an actual love story, it will probably leave you as cold as it left me.

You can watch the film — called The Stranger on the Shore — on Funimation.