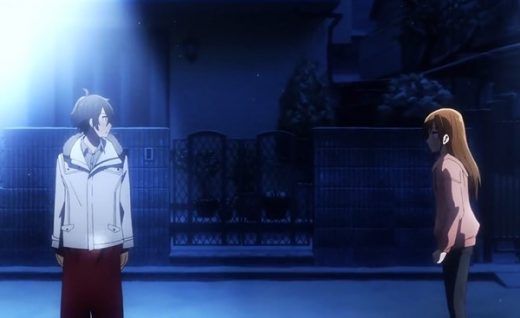 SPOILERS — Don’t read if you don’t want to know

Watching the Horimiya anime this week for the first time, I have to admit it surprised me when Miyamura asked Hori to marry him.


After all, the anime hadn’t come to an end when the marriage proposal took place, and it also arrived completely out of the blue.

If you haven’t gotten to that part in the anime series yet, or have already watched it but want to re-watch that sweet scene, when does Miyamura ask Hori to marry him, and does she say yes?

When does Miyamura ask Hori to marry him in the Horimiya anime series?

Miyamura’s marriage proposal arrives out of the blue, and is a huge surprise to Hori as well as to the audience watching this wonderful romantic comedy anime series.

Then again, isn’t that how a marriage proposal should be? Unexpected, but lovely?

That then is how Miyamura’s marriage proposal to Hori turns out to be, as he just blurts it out without plan or forethought.

This happens in Horimiya Episode 12 on Christmas Day, when Hori’s family want Miyamura to come for Christmas, but he cannot as he has to help his family in their bakery business.

He does find time to deliver a Christmas cake Hori’s family have ordered, however, and is then persuaded to stay for an hour.

Eventually though, he has to go back to his family’s shop, so Hori decides she will walk him back.

RELATED: When does Miyamura first tell Hori he loves her?

As it is right after Hori has realized they will be graduating from high school in just one more semester, she obviously has on her mind the idea that she and Miyamura will soon be separated. 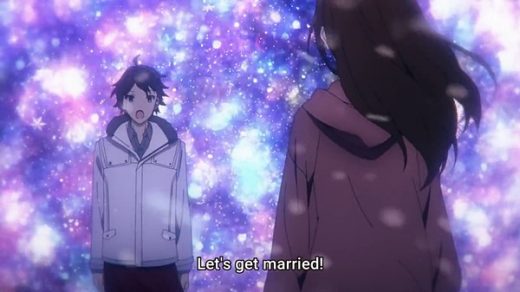 That’s why, as they walk in the snow, she suddenly stops and says “There are so many things I still don’t know about you, Miyamura”, and then shouts “I want to be with you, even after we graduate”.

Miyamura doesn’t answer for a moment, and then shouts back “Okay. Let’s get married”.

But, as Hori doesn’t answer, Miyamura realizes what he has done and begins to walk away saying “See you later”, until Hori shouts back “I’ll make you happy, Miyamura”.

So that is when Miyamura asks Hori to marry him and, yes, of course she says “Yes”.

Why wouldn’t she? They are perfect for each other.

Watch this episode and the other 12 episodes of Horimiya on Crunchyroll.

RELATED: When does Hori realize she is in love with Miyamura in the Horimiya anime series?