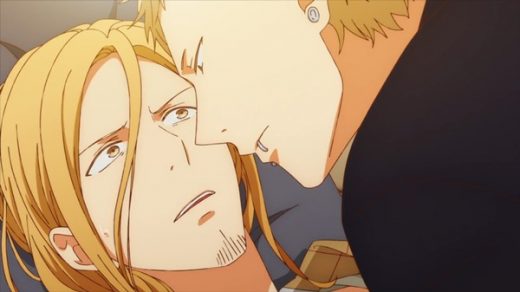 NOTE: There are many, many spoilers in the following Given article, so don’t read it if you don’t want to spoil the surprises.

While the main story in the Given anime series is the relationship between Mafuyu and Uenoyama, there are also two other members of the Given band — Haruki and Akihiko — who we get to know at the same time.


Akihiko is living with his ex-boyfriend Ugetsu and, even though Ugetsu is now moving on from the relationship, Akihiko is still in love with him.

Meanwhile, the other Given band member Haruki is single, and has a one-sided crush on Aikihiko

By Episode 11, however, Haruki realizes he is in love with Akihiko, with the anime ending with Haruki feeling lonely and wishing he had a girlfriend.

So, who does Haruki end up with in Given? And does Akihiko fall in love with him?

For that, you’ll have to watch the Given movie — which covers the events that happened between Haruki and Akihiko after the Given series ended. So, who does Haruki end up with in Given? And does Akihiko fall in love with him?

The feel of the Given movie is quite a bit different than the series as, not only does it concentrate on Haruki and Akihiko with not much of a spotlight on Mafuyu and Uenoyama, but the relationship between the pair becomes quite poor.

That’s because Akihiko arrives at Haruki’s apartment one night, drunk, having been kicked out by his former lover Ugetsu.

Knowing that Haruki is in love with him, and being drunk, Akihiko attacks Haruki and has sex with him against his will.

Afterwards, Haruki leaves his own apartment telling Akihiko to be gone by morning. He walks away down the street crying about what Akihiko said and did, as he knows how much pain Akihiko is in, but isn’t able to help him.

Unfortunately for Akihiko, he has nowhere else to go, so has to beg Haruki to allow him to stay there for a while when he returns to his apartment the following morning.

READ: Given‘s ‘Mafuyu’s Song‘ is so damned devastating, and don’t miss the live version too

The pair then end up living together in an uneasy friendship with Haruki still in love with Akihiko, until one day Akihiko leaves, goes back to school and the pair go back to being casual friends, with Akihiko more involved with things away from the band and Haruki.

A few months later, Haruki goes to a violin competition Akihiko has entered, but leaves at the end without speaking to him.

As he is sitting outside realizing Akihiko has moved on, Akihiko appears and tells Haruki he only disappeared because he wanted “to be the kind of man worthy of your love”.

Yes, it turns out Akihiko has realized he is in love with Haruki, but wanted to spend time away from him so he could fix his problems and become someone who deserves to be loved by Haruki.

The ending of Given sees the two walking away down a riverbank path together, having agreed to begin dating.

So, yes, Haruki ends up with Akihiko. And isn’t that the way it had to be!!

Watch the final Given movie scene, as Akihiko confesses to Haruki in the Crunchyroll video.

You can watch Given — the series and the movie — on Crunchyroll.

And do also listen to the ending theme song for Given — Centimilimental’s Our Own Theme Song (aka bokura dake no shudaika — which begins to play right after Haruki and Akihiko get together — it really is perfect.

You’ll find that down below as well.