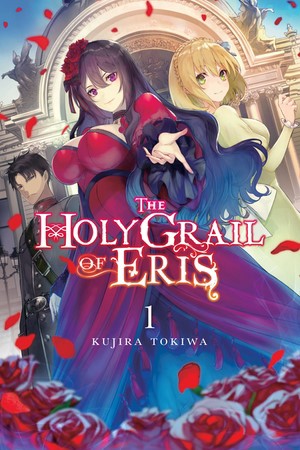 The fantasy light novel series (aka エリスの聖杯 in Japanese) written by Kujira Tokiwa and illustrated by Yu-nagi is out later in English than it is in German here in Austria, with Volume 1 publishing on April 19th in English, and Volume 2 coming out on July 19th.


The series currently has six volumes out in Japanese.

According to Yen Press, the plot for The Holy Grail of Eris goes like this:

As a viscount’s daughter, Constance Grail is an ordinary girl whose only notable trait is sincerity, leaving her with no real options when someone steals her fiance and falsely accuses her of petty theft at a ball. While Connie awaits her undeserved punishment, a ghost appears to offer a bargain.

The spirit is none other than Scarlett Castiel, a noblewoman once praised for her beauty, lineage, and undeniable charisma—and executed some ten years earlier for her wicked deeds. When Connie accepts this proposal, she is possessed by the infamous spirit who instantly turns the tide on her tormenter, thus saving the hapless girl from her miserable fate.

It’s never wise striking a deal without knowing exactly what you’ve committed to, though…or you might find yourself bound to a ghost dead set on revenge against her own enemies!

Pick up The Holy Grail of Eris, Volume 1 via Yen Press now in both digital and trade paperback versions.