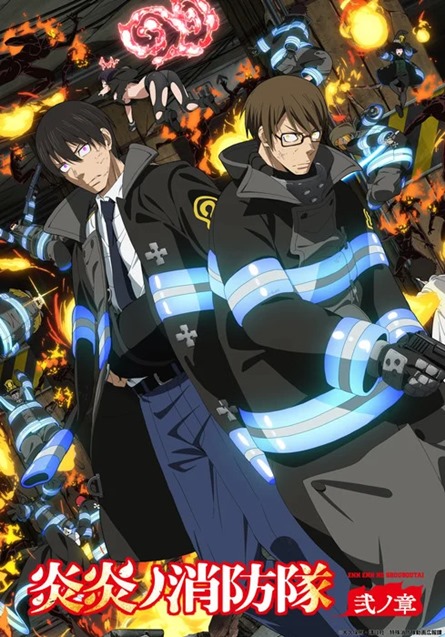 The official Fire Force Twitter account tweeted a new key visual for the second season of the popular anime series this morning (see above), and revealed the names of two new cast members. Two new cast members the show’s fans are sure to love.

They are Yūki Ono (BEASTARS, Food Wars! Shokugeki no Soma), who will play Takigi Oze a detective in the Tokyo Army and also Maki’s older brother, and Kousuke Toriumi  (Fairy Tail, Yowamushi Pedal) who is playing Hajiki, the first platoon chief of Special Fire Force Company 2. (See released CV visuals for both below).

Fire Force is one of the most popular anime series released in the last couple of years, with season 2 kicking off back in July this year.

Just like season one, it will have a total of 24 episodes at completion.

Fire Force 2 is animated at David Production and directed by Tatsuma Minamikawa (Wave, Listen to Me! and director of Episode 12 of first Fire Force season).

He is also the Script Supervisor.

Hideyuki Morioka returned from season one as the show’s Character Designer and Shin’ya Takano (the Kizumonogatari trilogy) is CGI Director.

Unlike many anime series, Fire Force season 2 also aired not too long after season one ended, which pleased fans immensely.

The series is based on the manga series En’en no Shōbōtai by Atsushi Ōkubo, who is also the writer and illustrator of the Soul Eater manga.

Both Crunchyroll and Funimation are streaming the anime series to select territories (not here in Europe, alas). (article continued below…)

And, just in case you are late to the party and haven’t yet started watching season 2 (you really should as, in my opinion, it is even better than the first season), check out the Fire Force 2 trailer below.

Yep, it is as beautifully animated and acted as the trailer suggests.